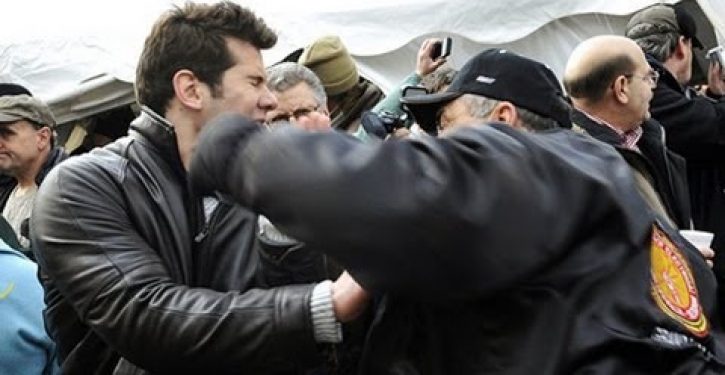 Knife-wielding union thugs went on a violent rampage in Lansing, Mich., after the state legislature passed a right-to-work bill on Tuesday.

According to reports from the scene, a tent set up by the conservative Americans for Prosperity was torn down and destroyed, and Fox News contributor Steven Crowder was assaulted.

“The protesters shouted ‘scab’ and ‘Walmart tent’ as they advanced,” Lee Stranahan wrote at Breitbart.com. “The tent had been used by AFP to house members who were reportedly threatened at last week’s demonstration,” he added.

“This is what democracy looks like,” they chanted as they destroyed the tent.

According to Crowder, women and children were in the tent when it was destroyed, and he was punched in the face four times.

Crowder said he did not respond with violence, but expressed concern that union protesters would have killed him.

“The mob would have literally killed me,” he said in a tweet.

Earlier in the day, Rep. Douglas Geiss, a Democrat from Taylor, threatened violence if the bill passed.

“We are about to undo 100 years of [labor progress]. There will be blood on the streets,” he said during a debate on the bill.

“We will relive the Battle of the Overpass,” he said recalling a 1937 incident where labor organizers clashed with security guards working for Ford Motor Company.

Previous Post
Obama has added 143K jobs since taking office, all in the federal government
Next Post
In Treatment