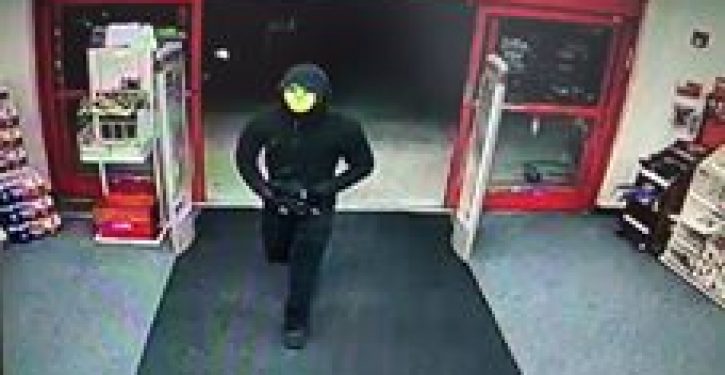 Snow blankets Buffalo, and people are stealing. Not bread and milk, though. We’re a long way from “Les Misérables.” These mobs are stripping shelves bare of electronics, furniture, cigarettes, beer and any other resale-able luxury items they can carry.

If these videos were only coming out of Buffalo and only in the past week, they’d be reassuring in a strange way. This is a blizzard, a natural disaster. The rapid breakdown of order should remind us chaos is always crouching at the door, ready to consume us all. Entropy is a law of nature. Instead of being shocked that things fall apart under extraordinary circumstances, we should be grateful for the systems — social, legal, technological and economic — that make things work under ordinary circumstances.

But they’re not reassuring. The behavior of these blizzard-buffeted Buffalonians is becoming the rule, not the exception. Every day is a blizzard now.

On Black Friday, for example, a pair of masked thieves entered a crowded Apple store in Palo Alto, California, and made off with $35,000 in merchandise. They threatened violence against anyone who interfered. Employees told customers to stand back and let the robbery happen.

Society is so broken in California that employees are basically trained to help assist tens of thousands of dollars of merchandise being stolen right in front of them (notice them holding customers back) as everyone else just stands around and watches.

How did we get here? pic.twitter.com/DBbWQJV3sk

This pattern is repeating itself all over the country, especially in jurisdictions with progressive prosecutors. Retail theft cost businesses almost $100 billion in 2021. Walgreens and Rite Aid locations in big blue cities like New York and San Francisco are closing down. It’s hard to stay in business when nobody pays for the merchandise.

I see the same lawlessness constantly on the Washington, D.C., Metro. Nearly every time I swipe my card to pass through the turnstile, I see at least one person vault over without paying. Sometimes a group of 10 or 12 people will make the jump, one after the other. My tax dollars at work.

This isn’t just my experience. D.C. decriminalized Metro fare evasion in 2018. Tickets and arrests for the offense fell from 15,000 in 2017 to fewer than 300 in 2021. The city announced in October it would begin issuing citations again, but as far as I can tell, nobody’s taken notice. It’s only gotten worse in the past few months.

Whether it’s retail theft or fare evasion, the message to law-abiding citizens is the same: “This country belongs to us, not to you. We can do as we please, and no one will stop us.”

The louder that message becomes, the worse things get. Muggers and rapists feel emboldened in this consequence-free environment. Services vanish as crazies drive people away and free-riders strain the system. People stop visiting cities. Anyone who can afford to picks up and moves.

This is the essence of broken windows policing — a theory that’s been much-maligned but never disproven. Target small, highly visible crimes like shoplifting, fare-jumping and public intoxication. Reduce the amount of flagrant lawbreaking the average person witnesses on a day-to-day basis, ideally to zero. Make public spaces feel safe and orderly.

To accomplish this, we need to be willing to enforce public order. Since the beginning of the Black Lives Matter movement in 2015, we’ve heard over and over again that the cost of stopping petty crimes is simply too high, that stopping criminals is worse than not stopping criminals. Michael Brown robbed a liquor store. Eric Garner was selling loose cigarettes on the street. George Floyd tried to pay with counterfeit money.

Their deaths were, of course, shocking. Nobody thinks these offenses should result in summarily administered death sentences. But nobody wants to live in a society that accepts them as normal, either. (RELATED: Police Confirm Two Incidents Of Looting Amid Winter Storm In Buffalo)

Metro cops could chase down fare-jumpers. A security guard (or even a private citizen) could have tackled the robbers at the Apple Store in Palo Alto. One reason this doesn’t happen is that nobody wants to be the next Derek Chauvin or George Zimmerman. Nobody wants LeBron James calling for his head on a pike. The unfortunate truth is that there are powerful, well-funded elements in this country that will always stick up for criminals of a certain complexion.

It doesn’t have to be this way. We don’t need to live permanently under the kind of anarchy you’d expect after a blizzard or other disaster. We can denounce police brutality without legalizing crime. We can insist public order is a public good and that the public has a right to it. (RELATED: Fed-Up Armed Local Defends Buffalo Neighborhood From Looters)

A winning Republican message for 2024 must answer the message of lawlessness being broadcast across our society, from the stores and subways to the highest levels of academia, with a strong rebuttal: “Wanting people to act respectably and pay for things doesn’t make you a racist. Your safety and comfort matter more than the supposed rights of thugs. This country does not belong to them. It belongs to you. You, the law-abiding. You, the decent. You, the honest.”

Virginia’s largest school system pays $455,000 for ‘equal outcomes’ consultant
Next Post
Due to grade inflation, typical grade at Harvard is now an ‘A’ rather than a ‘B’