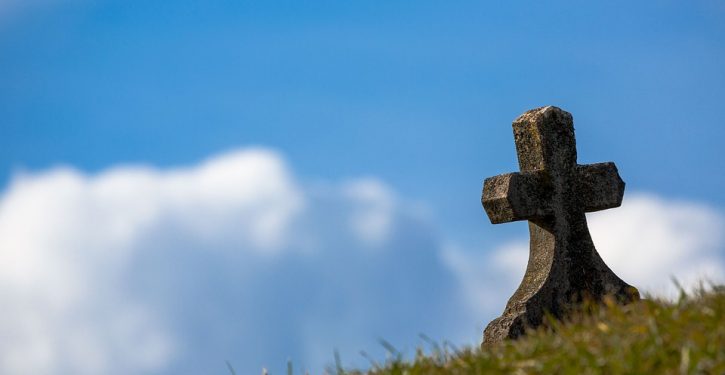 In New England, Catholic dioceses have sold off hundreds of churches as they grapple with declining church attendance and a surplus of under-utilized buildings. Episcopal dioceses have also sold off many churches, such as the Church of the Holy Spirit in Wayland. Sometimes, these churches are sold to another denomination. More often, they are demolished or converted into housing.

But what happens to the graves in churchyards when churches are sold? Can the human remains be moved somewhere else? The Massachusetts Appeals Court says, not so fast, just because a church property is sold, doesn’t mean that human remains can be moved off the premises.

Here’s the heart of its ruling in Church of the Holy Spirit of Wayland v. Heinrich, issued on May 5:

The controversy before us comes down to this: may cremated human remains that are buried in a churchyard [pursuant to an agreement for the sale of burial lots] be disinterred and moved elsewhere [when the parish is closed and the church property is sold] against the wishes of the families of the deceased? The trial court judge ruled that, as a matter of law, the church that established the churchyard retained the unilateral right to relocate the remains. As explained below, we conclude that the interred remains retain protection based on principles of contract, property, and trust law. Accordingly, we reverse and remand….

[W]e … hold that in the absence of a governing statute, common law trust principles apply to the disinterment of human remains from a dedicated burial ground until the families of the deceased have abandoned the remains or the burial ground is no longer recognizable as such….

The churches argue that even if the parish did not retain a unilateral right to disinter the remains, they have shown that disinterment is warranted by a material change in circumstances. We assume arguendo that the churches are correct that the owner of a burial ground could argue that unforeseeable changed circumstances render it no longer possible to fulfill the purposes that trust principles served to protect….

One subtle variant of the churches’ argument remains. This has to do with a finer parsing of the particular potential reasons that parishioners may have purchased their burial rights…. Many factors may well have done so, including the parishioners’ desire to have their remains interred at their home church. Indeed, as the term signifies, a churchyard is to some extent defined by its relationship to a nearby church. The Episcopal parties’ suggestion that the closing of the parish means that the churchyard is no longer a churchyard is not without some force. To the extent that parishioners acquired certificates of purchase in order that their remains could lie next to an active Episcopal church, that end no longer can be achieved.

Nevertheless, we ultimately are unpersuaded that such reasoning supplies the material change of circumstances that the churches need to negate the common law protections that the interred remains enjoy. For one thing, the Episcopal parties have not shown, and cannot show, that being interred next to an active Episcopal parish was the sole, or even paramount, reason why those who purchased the right to be interred in this particular location in fact did so.

For another, even if it could be shown that this goal was what drove a particular parishioner to acquire burial rights in the churchyard, there still is a separate interest in keeping in place remains that already have been committed to the ground. While many families acceded to the diocese’s request to move the remains, those that did not have unmistakably voiced their loved one’s desire that the remains not be moved. As the families themselves have put it, “the very purpose of the contract formed upon the purchase of a plot [is] the right to a final resting place and the creation of hallowed ground upon which family members can visit.” In light of the deference that the cases afford to immediate family members to speak for the dead, we conclude that the churches, as a matter of law, cannot meet their burden of demonstrating that changed circumstances have overcome the protections the remains enjoy under the common law.

And the court also rejected the free exercise claims of the Coptic church that wanted to buy the property (including the claims under the Massachusetts Constitution, which has been interpreted as providing strong RFRA-like protection to religious objectors):

[T]he Coptic church argues that because it is opposed to cremation on religious grounds, an adverse judgment would interfere with its free exercise of religion…. {“According to Coptic belief, the body must be honored as it was created in the image of God (GEN. 1:27) and the body is holy as the temple of the Holy Spirit and one must glorify God through the body. (1 COR. 6:19-20). As such, Coptic Christians believe the body belongs to Christ and must be respected [not burned] even after death as God’s creation.”}

It is uncontested that the Coptic church has a sincerely held opposition to cremation on religious grounds. The next question, however, is whether judicial relief in favor of the families would substantially burden the Coptic church’s exercise of its religious beliefs. When that church freely took title to the property, the cremated remains that the Coptic church now seeks to have removed already had been committed to the ground there. Under these circumstances, we fail to see how a judicial order preventing the Coptic church from removing those remains would constitute government interference with that church’s free exercise of religion rights. And it bears noting that the unilateral disinterment of the remains potentially might implicate the families’ own free exercise of religion rights.

{The [Massachusetts] Supreme Judicial Court has recognized that a restraint on a church’s making changes to its property can, under some circumstances, constitute a substantial burden on religious exercise. However, that case involved a landmark designation that would have limited a church’s ability to make changes to its altar space, not as here, a limitation on the church’s ability to prevent third parties from exercising their own property interests in outdoor burial lots.}

As noted, although the families’ primary focus is to prevent the disinterment of existing remains, two family members also assert a separate ongoing right to be buried there. An order preventing the Coptic church from interfering with interments that would occur after that church took title presents somewhat different free exercise of religion issues. Nevertheless, we remain unpersuaded by the Coptic church’s arguments.

As discussed above, individuals who bought a certificate of purchase thereby acquired a property interest in the land in the nature of an easement. The Coptic church has not demonstrated how allowing the two parties holding those rights to have their remains buried at the churchyard next to those of their family members would require any affirmative involvement by the Coptic church; it simply would prevent the Coptic church from interfering with rights that the individuals themselves hold in the property. Nor has the Coptic church demonstrated that such a judicial order could be seen as compelling it to endorse cremation….

[B]oth sides did little in their respective briefs to address what specific relief would be appropriate going forward if the remains were to stay in place, with the exception that the families included at the end of their brief a list of detailed injunctive terms they desired without ever explaining why they were entitled to such relief. {For example, the families request that we order that they have specific rights to use the Coptic church’s parking lot. Similarly, they seek the right to “beautify[]” the grounds even though the churchyard regulations prohibit families from planting trees, shrubs, or plants.} We recognize that our reversal of the judgment leaves many issues unresolved, such as the parties’ specific rights and obligations with respect to the maintenance of the remaining burial lots and the families’ access to them. This may require not only development of the facts, but also the resolution of at least one nontrivial legal issue. We leave such issues to the remand.