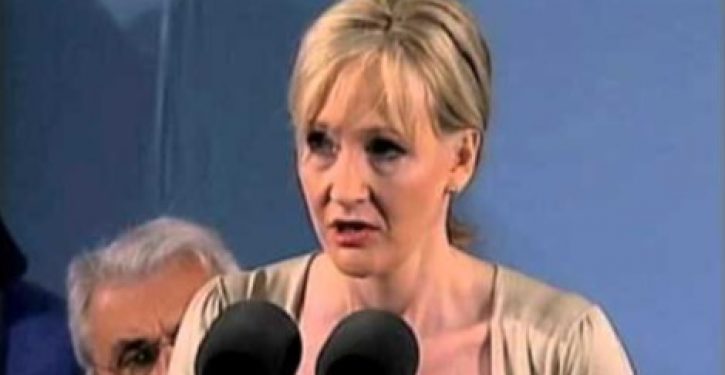 J.K. Rowling, the author of the Harry Potter series, criticized Scotland’s government for logging male rapists as “female” simply because they claim to be women.

“War is Peace. Freedom is Slavery. Ignorance is Strength. The Penised Individual Who Raped You Is a Woman,” Rowling posted Sunday on Twitter, alluding to George Orwell’s dystopian classic, “1984.”

Police in Scotland will record rapes as being committed by a woman in instances where the perpetrator has male genitalia and has not taken any steps to legally become a woman, as long as the rapist insists they are female, The Times reported. (RELATED: Activists Try To Cancel Dave Chappelle For New Comedy Special)

War is Peace.
Freedom is Slavery.
Ignorance is Strength.
The Penised Individual Who Raped You Is a Woman.https://t.co/SyxFnnboM1

Scotland is taking other measures to make it easier for men to identify as women, such as removing medical requirements for gender recognition certificates and reducing the amount of time required to obtain legal recognition for a new gender status, according to the Times.

“There are some areas in which biological sex matters, and rape stats are definitely one. Thank you for continuing to wake people up to these issues. #sexmatters,” author Milli Hill posted on Twitter in response to Rowling.

Rowling, a survivor of abuse and sexual assault, has been an outspoken critic of gender ideology, including the issue of men taking advantage of women’s spaces, including sports, by identifying as female. She has also questioned the gender transition process for minors, arguing that the recent surge in transgenderism among teenagers is a cause for concern.