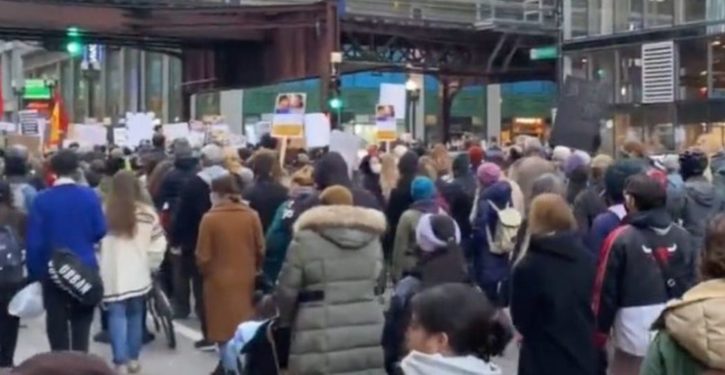 Protesters in opposition of the Kyle Rittenhouse verdict chanted for a “communist revolution” on the streets of Chicago Saturday.

Political activist and Baptist pastor Rev. Jesse Jackson and the Rainbow PUSH coalition led the march throughout the city with calls for the Department of Justice to investigate the verdict, according to CBS Chicago.

Footage captured a crowd of people marching the streets with a signs that called Rittenhouse a “white supremacist” and demanded to end the “fascist USA.” The crowd chanted in support of a communist revolution.

“The only solution is communist revolution,” the crowd is heard chanting.

“That’s right, we need communism. That’s what we need. We need that! We need that, sister, we need that very much,” a female demonstrator said.

The protest began around 2 p.m. at the Federal Plaza located on 219 S. Dearborn with hundreds of participants marching to Madison Avenue, then to North State Street and West Randolph, according to the outlet. Jackson called the Rittenhouse verdict “a major blow against justice and open season by the violence of the right-wing military.”

“I’m still very, very disappointed. Just a travesty of justice,” protester Alicia Senior-Saywell said, according to WGN 9. “The illegal gun in possession, the Kenosha police basically deputizing him. All of it is based in racism.” (RELATED: Biden Says He ‘Stands By’ Rittenhouse Verdict, Later Adds That He’s ‘Angry And Concerned’)

Rittenhouse was acquitted of five felony charges brought against him on Friday over the fatal shootings of Joseph Rosenbaum and Anthony Huber at a riot on Aug. 25, 2020, in Kenosha, Wisconsin. The then-17-year-old was also charged for the shooting-related injury of Gaige Grosskreutz.

Witnesses testified that Rosenbaum “lunged” towards Rittenhouse in an attempt to grab his AR-15 style rifle, while Huber repeatedly hit him in the head with a skateboard.

Protests erupted in major U.S. cities in opposition to the verdict. In Brooklyn, New York, protesters could be heard changing “every city, every town, burn your precinct to the ground!” Protesters also gathered in front of the Kenosha County Courthouse, where the trial presided.

“Due to violent, destructive behavior by a significant part of the crowd, the gathering in downtown Portland is a RIOT. All participants are instructed to proceed away to the WEST,” the Portland Police Bureau announced, according to the outlet.

Journalists and leading Democrats falsely claim Jacob Blake is dead, in discussing Rittenhouse verdict
Next Post
It’s Not Hard To Find CRT Influencing School Curriculum, So Why Do They Keep Lying?