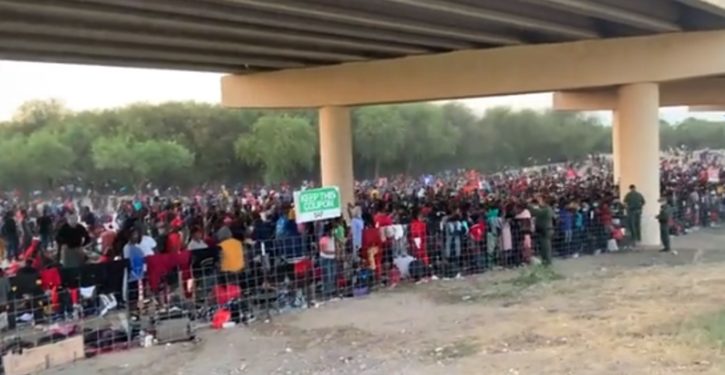 A ground-level view of the thousands of migrants sheltering under the Del Rio bridge. Law enforcement video via Bill Melugin, Twitter

On Thursday, the Federal Aviation Administration (FAA) imposed temporary flight restrictions (TFR) on the air space over the Del Rio, Texas international bridge, where thousands of migrants have gathered in the last three days to await “apprehension” by U.S. Customs and Border Protection (CBP).

This move appears to have been taken a few hours after Fox News reporter Bill Melugin updated the migrant count under the bridge to 8,200 on 16 September, and to have occurred about the same time Senator Ted Cruz (R-TX) showed up at the bridge to obtain a brief on the situation and broadcast his findings.

NEW: Source on the ground at the international bridge in Del Rio just sent me this video showing the deteriorating situation. Federal source says the number has now increased to 9,300.
It was 8,200 this morning, and about 4,000 yesterday AM.
Mostly Haitians, I’m told. @FoxNews pic.twitter.com/e8ftMp4YoQ

Cruz tweeted later that the migrant count has already grown to over 10,000 in less than a day.

Everyone under the bridge is there because of Joe Biden’s disastrous policies. #BidenBorderCrisis pic.twitter.com/tQFbYwzl5l

As Bill Melugin points out, the TFR by the FAA will prevent the Fox drone from getting video or still imagery of the conditions around the bridge.

NEW: We’ve learned that the FAA just implemented a two week TFR (Temporary Flight Restrictions) over the international bridge in Del Rio, TX, meaning we can no longer fly our FOX drone over it to show images of the thousands of migrants. FAA says “special security reason”. pic.twitter.com/aJrjAPO2Pz

It’s technically possible to use a drone (or manned aircraft) with imaging and video capability from a greater standoff.  But the air space for that would still have to remain available, whether in Mexico or from a greater distance in the U.S.  Moreover, at higher altitude (higher than 400 feet) a drone would require an FAA waiver to operate. something the FAA could issue a blanket denial for anyway.

Bill Melugin does obtain ground-level video on a regular basis, but even the most dramatic images (like our feature image above) don’t convey the same information as the synoptic imagery a drone can obtain from the air.  See the images included in Melugin’s tweet on the TFR.

It appears clear that the Biden administration wants to limit the flow of information on this topic.

We won't let the FAA control the news you get. Watch this video and see how @faanews tried to shut down our newsgathering on the southern border. That can't happen. Our own @BillFOXLA will be back with us on @FoxNews tomorrow at 8pm ET. pic.twitter.com/4WIJCC0O4y

Open thread (09/17/21)
Next Post
Biden can’t recall Australian PM’s name during teleconference: Calls him ‘that fella Down Under’