Although the coronavirus pandemic has deprived presumptive Democratic nominee Joe Biden of the opportunity to campaign publicly, as some argue Donald Trump is doing at his daily press briefings, it has also been a blessing in disguise. It has taken the pressure of constant travel, long hours, and the other rigors of campaigning off the 77-year-old.

Consider against that backdrop one of his latest efforts to communicate with prospective voters. In it, he gives a well-deserved shout-out to grocery clerks, bus drivers, and transit workers for keeping the nation supplied with food during the shutdown.

It’s not the message that is problematic but the delivery. I’m guessing that he is reciting a prepared speech. But notice how many times he slurs his words or betrays other indications that he may not be mentally able to serve as president.

Joe Biden: "It's time we as a nation thought about how much we depend on our grocery store clerks, our bus drivers, our transit workers." pic.twitter.com/u2shufCEaS

There has been much written in these pages about Biden’s gaffes, memory lapses, and language difficulties. What makes this latest example noteworthy is that it is coming ostensibly from an abnormally well-rested presidential candidate. Yet, despite the fact that the message is being delivered under optimal conditions, he can’t get through it without tripping all over his words.

While Democrats need a candidate to put up against Donald Trump, voters made it clear early in this race that Joe Biden was not the man for the job. He is still not.

The country has never before been asked to consider voting for a candidate who, age aside, will not likely make it through one term as president. We shouldn’t be asked to do that now.

Stacey Abrams says she would be ‘an excellent running mate’ for Joe Biden
Next Post
Cartoon of the Day: Best buds 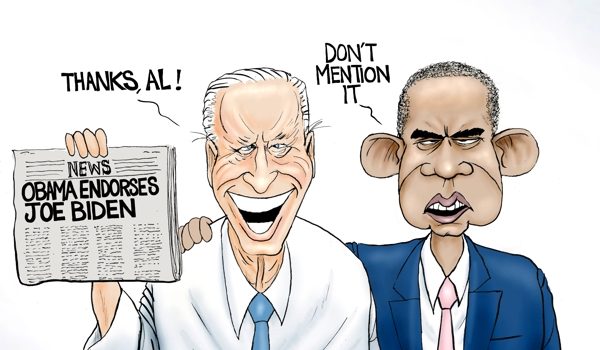