According to the Left, anything Donald Trump does or says is motivated by either (1) greed, (2) racism, or both. When the U.S. Air Force had pilots stay overnight at a Trump-owned resort in Scotland while their aircraft were being refueled, it had to be Trump’s idea. Never mind that the Air Force had been putting pilots up at the resort since before Trump was elected. The move still had to be geared toward his making a fast buck.

Never mind either that he has donated his $400,000 salary to charity for each of the first three years of his presidency. Liberals know Trump is evil — period.

His greed has been on display again lately regarding his promotion of the malaria drug hydroxychloroquine as an off-label treatment for coronavirus. That’s the theory according to “Morning Joe” co-host Mika Brzezinski, who on Monday’s show urged viewers to “follow the money,” adding:

There’s got to be some sort of financial tie to someone somewhere that has the president pushing this repeatedly.

But if her hunch is right, how does she explain the FDA’s fast-track approval of the drug for use in treating COVID-19 symptoms? Or the abundant anecdotal evidence that the drug is effective (despite hubby Jow Scarborough’s referring to it five times as “an unproven drug”)? (RELATED: State rep. in Michigan credits hydroxychloroquine, Trump for surviving coronavirus)

Is what we’re being told about the coronavirus pandemic wrong?
Next Post
Cartoon of the Day: #CornavirusCure 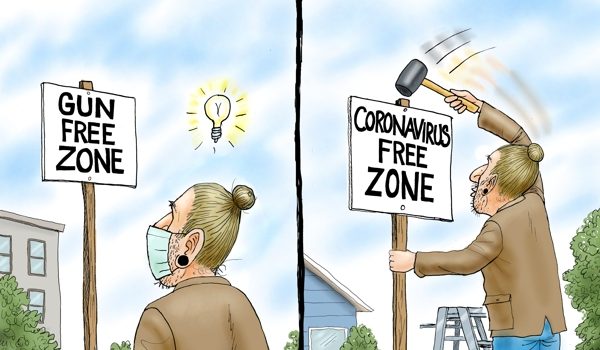