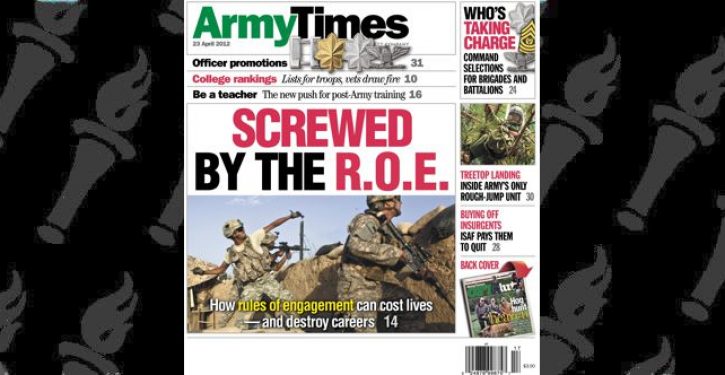 The Army Times appointed as its top editor a 28-year-old feminist from Brooklyn who has repeatedly tweeted that she hates President Donald Trump and worked as a spokeswoman for a New York councilman who describes himself as a “moderate Democrat.”

After interning for several Democrats, graduating Hofstra University in 2014, and contemplating art school, Sarah Sicard wrote for a marijuana publication called the “Bluntness,” served as communications director for a New York city council member, and worked in corporate PR, according to her resume and online bios.

As of Jan. 10, she occupies the top editorial position of the Army Times, which has been published since 1940 and is one of the preeminent publications for military men and veterans.

That’s a jarring contrast with the audience that pays for subscriptions.

“Exit polling in the 2016 presidential election saw military members and veterans vote nearly two-to-one in favor of Republican candidates,” according to the Military Times, the Army Times’ parent publication.

“Does anyone else feel like Donald Trump’s endorsement of anything makes the rest of us immediate hate that thing?” Sicard tweeted in May 2019.

“Okay I hate @realDonaldTrump” she tweeted in September 2018.

In January 2019, she tweeted she had lost followers because of “all my callouts of @POTUS.”

That same month, she said:

I only say this as someone who doesn’t want to see Dems lose. Not to hate on EW, but I don’t know if another white woman is the right choice to rouse minority support, and she’s definitely not going to take back the Rust Belt. I want the party to bet on a person who can do both.

In 2018, she was communications director for New York City Councilman Robert Holden, according to her résumé. Holden is a lifelong registered Democrat who got permission to appear on the ballot as a Republican after losing the Democratic primary in 2017. He describes himself as a moderate Democrat.

From October 2015 to October 2017, she wrote for Task & Purpose, a military publication. Before that, she served as press intern for New York Democrats Rep. Louise Slaughter and Gov. Andrew Cuomo, the résumé stated.

Sicard repeatedly gave credence to the thin allegations against Supreme Court Justice Brett Kavanaugh, saying in September 2018, “We’ll probably never know the exact details of 30 years ago conclusively. Doesn’t mean Brett Kavanaugh is innocent. Lack of evidence means he won’t be convicted in court, but the hearing proved him guilty of deep partisanship, which should preclude him from serving.”

“[M]y feet are dying because I’ve been standing for two hours while live-tweeting because my reserved seat was stolen by a man in comfy shoes who is not even paying attention to this panel and no I’m not bitter about gendered shoes why would you ask that?” she said in September 2019.

“Remember when Republicans were the party of Lincoln?” she said in August 2017.

A job ad for editor of the Army Times reads, “One of Sightline’s brands, the Army Times, is hiring for an editor to help lead the largest independently owned newsroom focused solely on the U.S. military.”

“You’ll manage a team of experienced reporters and oversee a steady stream of breaking news online as well as long-form cover stories for our bi-weekly magazines, which for years have been the top-selling publications at military installations,” it reads.