This year’s theme is “The Spirit of America,” and decorations include ones that honor the troops, past presidents and other parts of America’s history. There is a scaled replica of the White House and other Washington, D.C. landmarks, glittering Christmas trees, white stars hanging from ceilings, and much more.

While many praised the decor, some Trump critics bashed Mrs. Trump’s choice of Christmas decorations.

“This remake of The Shining is the scariest one yet,” liberal author John Pavlovitz tweeted in response to her video of the decorations.

This remake of The Shining is the scariest one yet. https://t.co/hDliHBmeKR

“Lol not even a hint of Christ to be found,” comedian Paul F. Tompkins claimed. American screenwriter Bob Schooley also echoed these thoughts, suggesting that perhaps “there’s a scrabble Jesus in there somewhere.”

The 2019 Christmas decoration complaints were not limited to direct attacks on the decor, either. Many tweeted suggesting that the decorations represented the sometimes controversial decisions and comments made by President Donald Trump.

“Christmas has nothing to do with American patriotism. This right here is when we cross into Christian nationalism,” Rev. Dr. Chuck Carrie tweeted. “If there is a #WarOnChristmas, it is being waged at The White House. Not with this holiday display, but with Donald Trump’s nationalistic policies.”

“The ‘Spirit of America’ is drinking heavily & hanging on by a thread because of the @WhiteHouse. #BeBoo birther!” actress Nancy Lee Grahn wrote.

Melania’s Christmas decorations have sparked backlash from Trump critics in past years, too. The red cranberry Christmas trees featured at the White House in 2018 were attacked as the “Christmas from hell.”  In 2017, her decorations were dubbed “satanic” because of icy branches and frosted trees. 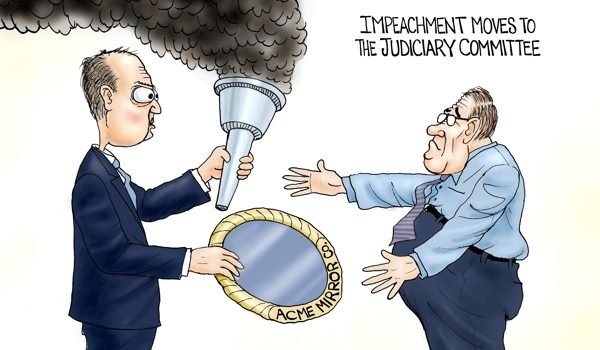 Cartoon of the Day: Passing of the hoax
Next Post
Kamala Harris calls it quits on 2020 quest for White House