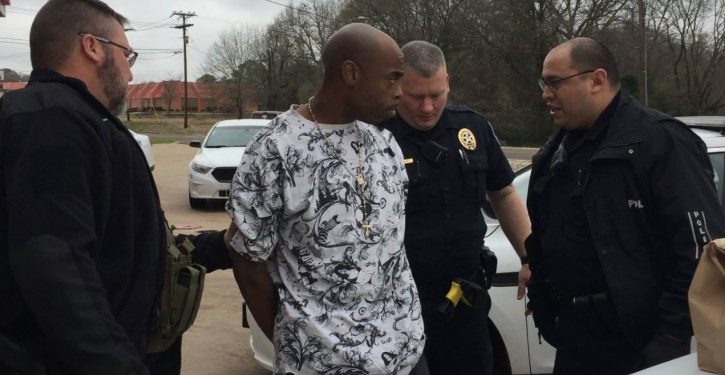 Last Friday, according to the Fort Worth Star-Telegram, 40-year-old Robert Thompson was charged with aggravated assault with a deadly weapon and aggravated robbery. The charges were brought in connection with a robbery Thompson had committed early the previous morning. The crime, which was captured on surveillance video, shows two women — an employee and a customer — bound with duct tape, lying on the floor behind the cashier’s stand as Thompson systematically douses one of them with lighter fluid and sets her on fire. The video appears below, but be warned: The content is graphic and disturbing.

The article goes on to note that the burn victim, who was hospitalized, will survive her injuries and that Thompson, who made off with $800, is being held on a $4 million bond.

But there many questions that remain unanswered. One of them is why attempted murder charges were not brought against Thompson for his depraved and potentially deadly actions. Another is why a hate crime enhancement was not added to the charges: If the race of the victims (white) and perpetrator (black) had been reversed, such an enhancement would at least be under consideration.

Still another troubling question is why this story is not receiving national attention. A Google search reveals that the gruesome tale was covered by the Dallas Morning News and the above-mentioned Star-Telegram, as well as local TV stations (see here and here). But the networks haven’t touched it, and neither have major print news outlets, such as The New York Times and The Washington Post. Is it because reports of black-on-white crime don’t fit in with their preferred narrative?