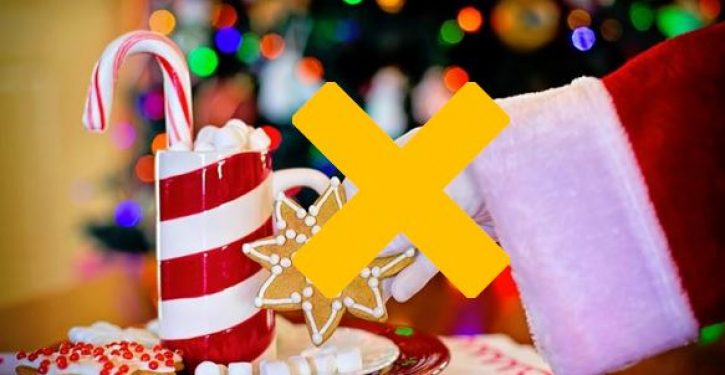 Ho, ho, ho! Have you been a good girl or boy? It doesn’t matter. Liberal Grinches are already out in force doing their best to destroy the nation’s most festive holiday for the legions of Americans of all faiths who celebrate Christmas in some fashion.

We’ve already had the season’s first sighting. No, not of a jolly man riding a sleigh behind a team of eight reindeer, but of a schoolteacher (substitute, no less) telling a class of first-graders that Santa Claus doesn’t exist. It happens every year, but this year a hopeful note was at least sounded by the school superintendent, who said a statement:

I am troubled and disheartened by this incident. The childhood wonder associated with all holidays and traditions is something I personally hold near and dear in my own heart.

Although I haven’t begun doing my own shopping, I fully expect that “Santa’s Husband” — an illustrated children’s book that depicts St. Nick as gay, black and married to a man — will be back in the headlines, if not in stores.

The HuffPo has already reported in, alerting parents to the dangers of exposing their tykes and tykettes to the animated classic “Rudolph the Red-Nosed Reindeer,” which drips with social injustice. One commenter on social media who has evidently already had a little too much holiday cheer wrote that “Rudolph is a parable on racism & homophobia w/ Santa as a bigoted exploitative prick.”

Dems reveal their priorities: This will be first piece of legislation they take up in new House
Next Post
Indian ‘corpse smuggler’ arrested with 50 human skeletons in his luggage