Page filed the suit in federal court in Oklahoma against the DNC, the law firm Perkins Coie, and two of its partners, Marc Elias and Michael Sussmann.

Perkins Coie, which also represented the Hillary Clinton campaign, is the firm that hired Fusion GPS, the opposition researcher that investigated Donald Trump’s links to Russia.

As part of the $1 million project, Fusion GPS hired former British spy Christopher Steele to conduct the investigation. The result was a 35-page dossier full of allegations that the Kremlin is blackmailing Trump and that the Trump campaign conspired with Russian operatives to influence the election. (RELATED: Here Is How Much The DNC And Clinton Campaign Paid For The Trump Dossier)

Page, an energy consultant, features prominently in the dossier, though he vehemently denies its allegations.

In the report, which was provided to numerous journalists and the FBI, Steele alleged that Page was the Trump campaign’s back channel to the Kremlin for the purposes of conspiring to influence the election. Steele cited anonymous sources who claimed that it was Page’s idea to release stolen DNC emails through Wikileaks. The dossier also alleged that Page met secretly with two Kremlin insiders, Igor Sechin and Igor Diveykin, during a trip to Moscow in July 2016. Page has repeatedly denied meeting with either man.

Steele and Fusion GPS briefed numerous reporters on the allegations about Page, though only Yahoo! News published a story on the topic prior to the election. Page previously sued Yahoo’s parent company, Oath, Inc., over the article, which was published on Sept. 23, 2016. The lawsuit was dismissed in May, but Page has appealed the decision.

The dossier’s claims about Page did not stop just with media stories. The FBI relied heavily on Steele’s unverified report to obtain four Foreign Intelligence Surveillance Act warrants against Page. The first warrant was granted on Oct. 21, 2016, shortly after Page left the campaign. The fourth and final warrant expired in September 2017. 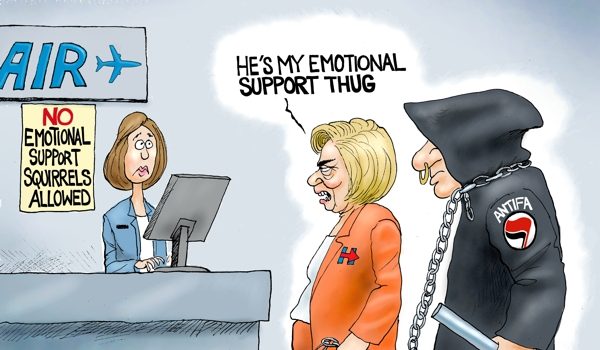 Cartoon of the Day: Baggage claim
Next Post
Solution to Elizabeth Warren’s problem: Say she ‘self-identifies’ as an American Indian