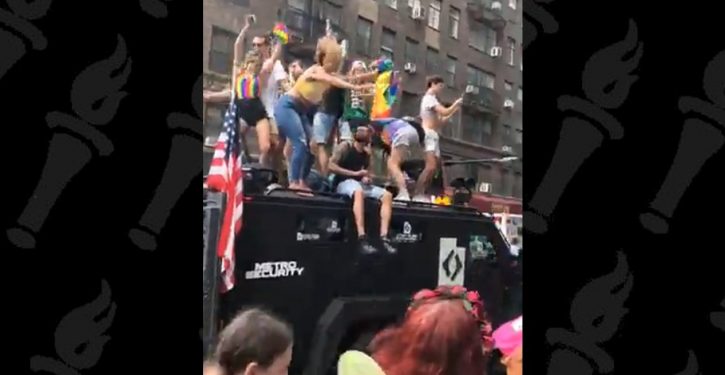 A Utah-based gun group was detained and had their military armored personnel carrier and replica gun confiscated while attending the LGBT PrideFest in New York City.

Utah Gun Exchange (UGE) was bringing awareness to LGBT and minority gun rights during Pride Week by exhibiting the only civilian-operated Lenco BearCat, which the group adorned with American flags and gay pride flags.

“We feel like Second Amendment issues are LGBT issues, and we found out that is absolutely the case,” Bryan Melchior, co-owner of UGE, told The Daily Caller News Foundation. “When you talk about firearms and the defense of yourself and others, one thing LGBT people are very passionate about is their love and their love for their partners, and they’ll do anything to defend them.”

UGE parked the BearCat at Washington Square Park alongside various other exhibitors and vendors. For more than four hours, the eight-person team played music, danced on the vehicle, interacted with parade-goers and participated in Second Amendment outreach.(RELATED: Gun Registration Site Crashes As Deadline Looms, Preventing Gun Owners From Complying With California Law)

At around 4 p.m. in the afternoon, a New York City Police Department officer approached Melchior noting that the department received a complaint about the prop gun and further questioned its functionality. During their conversation three other officers arrived and immediately climbed atop the BearCat and dismantled the replica gun without notice. More than 15 additional members of NYPD and NYPD Legal arrived shortly after and presented UGE with a citation for violating the city’s toy gun code, claiming the replica did not comply since it was not equipped with a brightly colored cap.

Police confiscated the $400,000 BearCat without any warning, which also contained $60,000 of camera equipment.

Melchior was then told he needed to be taken into police custody. As he attempted to call his attorney, Police advised him to first get processed at the police station. Melchior was then handcuffed and driven to Manhattan’s sixth precinct, while the rest of the UGE team was left on the sidewalk. Melchior told The DCNF that as he was being apprehended, he unlocked his iPhone to record, but the police took the phone away from him.

When asked if Melchior was arrested an NYPD Legal officer replied, “In a very technical sense, yes.”

Once at the precinct, Melchior was held in a booking room and later a jail cell for approximately two hours before getting released. He told The DCNF that he was interrogated about the Utah Gun Exchange and refused to comply without a lawyer.

UGE eventually got everything back except for the $10,000 replica gun and some video footage that was erased from the iPhone. They have had no success reaching out to the NYPD on how to reclaim the missing items.

The group was also held in Chicago the prior week while participating in the March For Our Lives nationwide summer tour kickoff. They had been at the event for less than an hour when they were approached by the Chicago Police and later detained for six hours for an inspection. They received no charges.

The Utah Gun Exchange has been going on a nationwide Freedom Tour to promulgate the preservation of the Second Amendment. In addition to a firearms marketplace, UGE is a media company that builds platforms like UGETube that seeks to be a substitute for media companies like YouTube that censor content and advertisers.