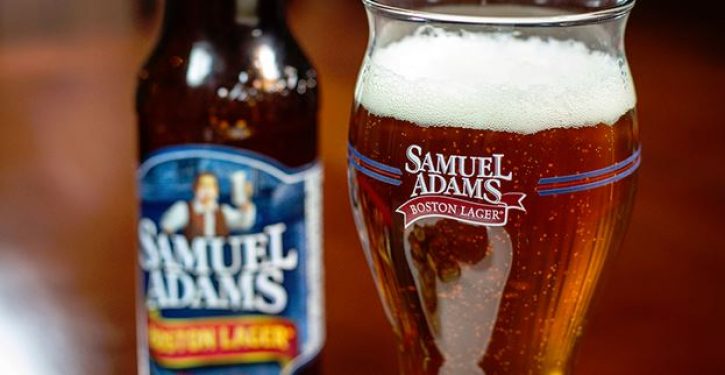 But there is something missing from the quote that cancels out the credit. See if you can spot it in the video capture of the ad, below the fold (the transcript follows):

Why name a beer after Samuel Adams? Because Samuel Adams signed the Declaration of Independence. He believed that there was a better way to live. ‘All men are created equal, they are endowed with certain unalienable rights: life, liberty and the pursuit of happiness….’

The words, of course, are not those of Adams but of Thomas Jefferson — but that isn’t the real problem. It’s the seemingly deliberate omission of the phrase “by their Creator.” The quote in its entirety reads: “[A]ll men are created equal, that they are endowed by their Creator with certain unalienable Rights, that among these are Life, Liberty and the pursuit of Happiness.”

The omission of God in the ad didn’t go unnoticed. Breitbart reports that Samuel Adams’ received some negative blowback to its Godless new product on its Facebook page.

One user wrote: “So run a commercial during Independence Day and intentionally misquote the portion of the Declaration of Independence.”

“Put God back in your commercial or loose [sic] this customer! History shows that Samual Adams was a Christian and a God fearing man,” said another.

But not all commenters were offended. Some, in fact, took issue with those who were. One said, “I don’t need religion. I especially don’t need it in my beer. Keep up the good work and I’ll keep drinking your beer!”

The company released a statement indicating that they were simply following industry standards:

The Beer Institute Advertising [and Marketing] Code says, ‘Beer advertising and marketing materials should not include [sic: the original reads “employ”] religion or religious themes.’…

While we understand your objection to the omission of the phrase ‘by our creator’ in other circumstances (after all, they occur in the Declaration of Independence which Samuel Adams signed and helped author) we believe it would be outside our industry guidelines to invoke those religious words in a beer commercial.