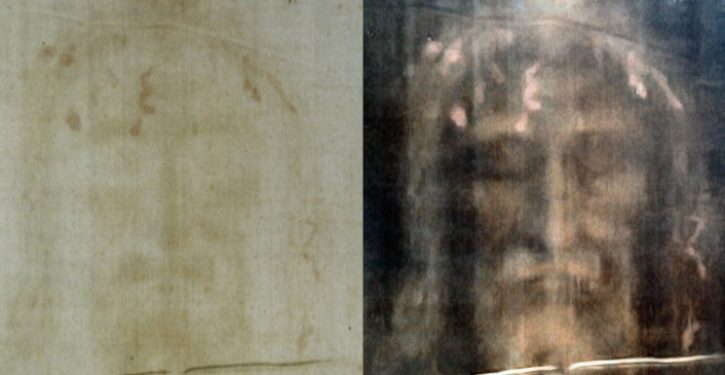 News Flash: Rabbi Jonathan Cahn asked me to inform Townhall readers about his prophetic movie “The Harbingers of Things to Come.” Watch the trailer, and you’ll want to buy tickets for the May 12 one-night-only showing at theatres throughout the nation.

Thanks for joining us on this glorious Resurrection Day that changed the course of human history.

To help us celebrate, I invited Russ Breault to be my co-writer. Russ is a nationally known speaker, writer, theologian, Shroud of Turin expert, and president of Shroud Encounter, as featured in a new video. He is also a founding board member of  SignFromGod.org, our Shroud education ministry that spearheaded the effort resulting in the Museum of the Bible’s exhibition about the Shroud that opened in February and closes on July 31, 2022.

In 2019, Russ and I co-wrote “What Is the Shroud of Turin? Facts & History Everyone Should Know” — a Christianity.com primer found on Google’s first page when Shroud of Turin is searched.

We begin asking, “If the Shroud Could Speak, What Would It Say?”

Every day, but especially on Resurrection Sunday, the Shroud of Turin speaks a universal language conveying personalized messages to those contemplating its meaning. However, before discussing the messages, readers must know that the Shroud of Turin is a linen cloth measuring 14.6 ft by 3.5 ft. Globally, millions of Christians from all denominations believe it to be the authentic burial Shroud of Jesus Christ. Since 1578, the mysterious cloth has resided at the Cathedral of St. John the Baptist in Turin, Italy — thus the name, “Shroud of Turin.”

“Mysterious” because the Shroud bears an anatomically correct faint yellowish image of a bearded, crucified man stained with Type AB blood from death wounds that match the Passion of Jesus Christ — as described in the gospels.

The Shroud is sometimes jokingly referred to as the “first selfie” — an apt description considering the full-body front-to-back image reflects what Jesus could have, or did, look like the nanosecond before He was resurrected. Moreover, modern science cannot explain why this “selfie” appears on the Shroud with stunning, enhanced details hidden for centuries and only revealed after technological breakthroughs such as photography in the 1800s and 3D image analysis in the mid-1970s.

And what about the carbon dating test of 1988 that dated the Shroud between 1260 and 1390? For decades, scientists have questioned those erroneous dates after many botched testing protocols were revealed. Now, historical research has found numerous documents referencing the Shroud dating back to the 3rd century — further discrediting the medieval dates.

After the above brief explanation of what the Shroud is, we must explain what it is not. (Especially important on Easter.)

Your faith in Jesus Christ as Lord and Savior does not hinge on the Shroud’s purported physical evidence confirming His death and resurrection. The burial cloth does not have to impact one’s faith — unless you want it to. Your personal relationship with Jesus reigns supreme as if the Shroud did not exist. But the Shroud does exist — despite great historic odds — and is the world’s most studied artifact with numerous unexplained properties that defy scientific principles.

Most baffling was when the Shroud was first photographed in 1898, its ghostly, yellowish image was transformed as it developed into a positive black and white image. That developed image showed all the excruciating marks of torture on the crucified man’s body and most famously, humanized His serene Holy Face. The shocked photographer knew he was seeing Jesus. It turns out, the Shroud image we see with our naked eye is a negative image that is slowly fading over time. Yet, after it was developed, the positive image has not faded. How is that possible?

Then 1970’s technology brought forth a new revelation. Although the image on the Shroud appears two-dimensional, it carries three-dimensional “distance information,” allowing for precise modeling. That discovery led to the first and only comprehensive hands-on study of the Shroud in 1978 called STURP (Shroud of Turin Research Project) — involving 33  esteemed American scientists with no religious agenda. Read the three concluding paragraphs of their report, especially:

“We can conclude for now that the Shroud image is that of a real human form of a scourged, crucified man. It is not the product of an artist.”

And what does this “real human form of a scourged, crucified man” want to tell us on Resurrection Sunday as world inches closer to war? Could it be:

“I understand your suffering. I too have suffered. I am with you in your trials. There is far more to life than your brief time on earth. Always remember, I have overcome death and so will you. Hold fast to your faith.”

Could Jesus also want to tell us that His burial Shroud is a war-torn banner conveying a message of love and hope to a world descending into darkness and despair? Is that why the Shroud has miraculously survived devastating fires, wars, hatred, and natural aging? Did Jesus purposely leave his banner in the tomb?

“In that day the Root of Jesse [Jesus] will stand as a banner for the peoples; the nations will rally to him, and his resting place will be glorious” (Isaiah 11:10).

“You have given a banner to those who fear You, That it may be displayed because of the truth” (Psalm 60:4).

Today, all Christian denominations can rally together under His Shroud banner of love and hope representing the life, suffering, death, and resurrection of Jesus Christ. He is risen! He is Lord of Lords, King of Kings, and He will reign forever and ever!

Author’s Note: Readers can find all previous volumes of this Bible series here.  The first 56 volumes are compiled into a book titled “Bible Study For Those Who Don’t Read The Bible.”