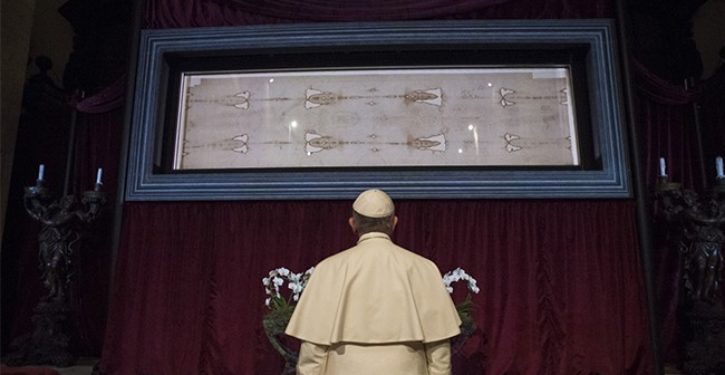 It’s Super Study Sunday! Praise God for the Vol. 100 timing — a heavenly confluence sponsored by God’s universe and those He created.

This super day requires super thanks to Townhall and loyal readers of all faiths. A special salute to my mighty band of core commenters whose knowledge of The Word enhances each lesson. Finally, hail to the husband for his often thoughtful theological contributions.

Today’s Scripture about Christ’s burial Shroud reflects SignFromGod — the ministry I lead with its board of Shroud experts. Our mission is education about this cloth known as the Shroud of Turin — believed by millions around the globe to be the authentic burial Shroud of Jesus Christ. That explains why a 14.6-foot by 3.5-foot linen cloth lying in a church vault in Turin, Italy, is the world’s most studied artifact since modern science has not determined the source of the cloth’s numerous unexplained mysteries. Those mysteries include photographic-negative properties discovered in 1898 and 3D distance information revealed in the 1970s.

Topping the mystery list is the question: What caused the anatomically correct full-body, front-to-back detailed image of a naked crucified man to form on linen cloth with wounds mirroring specific, unique tortures inflicted upon Jesus as recorded in the Bible?

Thus the reason why the Museum of the Bible in Washington, D.C., is hosting a major high-tech exhibition about the Shroud of Turin, opening February 26 through July 31. (Full disclosure: Starting in 2018, SignFromGod’s board spearheaded this exhibition and is a sponsor of the two opening events.)

I asked Brian Hyland — Museum of the Bible’s associate curator of manuscripts and Shroud exhibition curator — to share his thoughts with Townhall readers. Hyland said:

“Pope St. John Paul II called the Shroud ‘a mirror of the Gospel.’ The image of the man of the Shroud shows a pattern of wounds, bruises, and abrasions that closely matches the description of the passion of Jesus found in the Gospels. To help our guests understand this, we printed the frontal image from the Shroud onto a 3D touch table. Touching a sensor next to a visible wound on the Shroud will play a recorded Gospel verse corresponding to this wound. Most sensors play more than one verse. We recorded 25 verses drawn from the four Gospels.”

Let’s review some of those verses, starting with passages establishing that Jesus was wrapped in a linen cloth owned by Joseph of Arimathea found in (Matthew 27:59), (Luke 23:53) and (John 19:39-40). Mark’s gospel is the most concise:

“So Joseph bought some linen cloth, took down the body, wrapped it in the linen, and placed it in a tomb cut out of rock. Then he rolled a stone against the entrance of the tomb” (Mark 15:46).

“And Nicodemus, who at first came to Jesus by night, also came, bringing a mixture of myrrh and aloes, about a hundred pounds. Then they took the body of Jesus, and bound it in strips of linen with the spices, as the custom of the Jews is to bury” (John 19:39-40).

Then, on Sunday morning, a world-changing discovery was made at the tomb:

“But Peter arose and ran to the tomb; and stooping down, he saw the linen cloths lying by themselves; and he departed, marveling to himself at what had happened” (Luke 24:12).

The gospels of Matthew and Mark do not mention the “linen cloths lying there” or “strips of linen” (in some translations of Luke and John) — used to bind “about a hundred pounds” of spices to Jesus’s body. Instead, Matthew and Mark focus on the angel who famously says, “‘He is risen! He is not here’” (Mark 16:6).

Note the “handkerchief that had been around His head, not lying with the linen cloths” is also believed to be a much-studied artifact called the Sudarium of Oviedo — residing in Oviedo, Spain. Unlike the Shroud, there is no discernible human image on this “handkerchief” or “napkin” (in some translations.) Nevertheless, there are blotches of body fluid stains, and rare Type AB blood has been identified — the same blood type found on the Shroud. Moreover, forensic studies performed on the Sudarium’s stains match face wounds on the Shroud man. Those scientific findings are compatible given the “handkerchief” is thought to have covered Jesus’s face and head immediately after He was removed from the cross.

The biblical verses about the burial cloths found in Christ’s empty tomb continue to fascinate, and interest in the Shroud is at an all-time high.

Here is Chief Curatorial Officer of the Museum of the Bible, Dr. Jeff Kloha, to explain why the museum is hosting this six-month exhibition about the Shroud:

“Museum of the Bible’s galleries feature immersive, interactive, technology-rich exhibits focused on the history, stories, and impact of the Bible. The Shroud of Turin is one of the most immediately recognizable images of any figure from the Bible. It has been featured on medieval prints, magazine covers, documentaries, and even in 21st century Hollywood films.

“And because the image directly reflects the descriptions of the crucifixion and burial of Jesus as described in the New Testament gospels, an exhibition about the Shroud provides a unique opportunity to provide visitors to Washington D.C. to connect to these biblical stories in a new, immersive, engaging way—even while the Shroud itself lies in its vault in Turin, Italy.”

I am honored that you joined us for Super Sunday’s Volume 100. Every day I thank our Lord Jesus Christ for the opportunity to write about and share the Word of God with Townhall readers. And, if you keep reading, I will keep writing. Amen!

Myra Kahn Adams is a conservative political and religious writer with numerous national credits. Her book, “Bible Study For Those Who Don’t Read The Bible,” reprints the first 56 volumes of this popular study. Myra is also Executive Director of SignFromGod.org, a ministry dedicated to Shroud of Turin education. NEWS FLASH: SignFromGod is a proud sponsor of Museum of the Bible’s two opening events for its six-month, high-tech exhibition about the Shroud of Turin.  The preview is on February 23, and the grand opening event, February 26. Contact: [email protected] or Twitter @MyraKAdams. 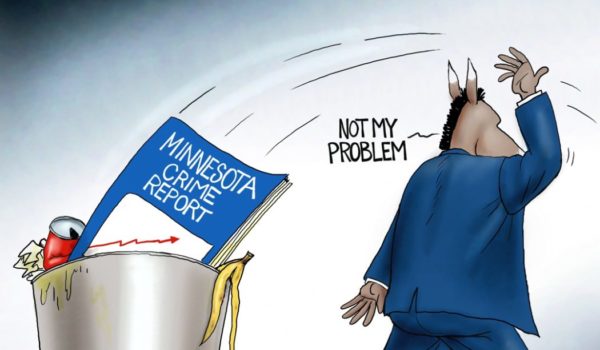