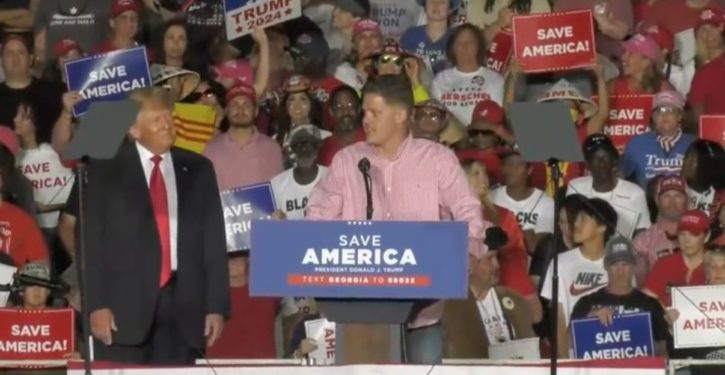 [Ed. – He spoke — not politically, and not in uniform — at the Trump rally in Georgia last weekend.  It’s a gray area; I didn’t hear Lance Cpl Clark say anything amiss, but the mere appearance at the rally (i.e., being called up for praise) can be interpreted as prohibited.  In the current climate, it was likely to be.  That said, it shouldn’t take long to look into such a simple matter, nor does the infraction, if it’s determined to be one, merit more than a command-records reprimand.  If the Marine Corps doesn’t want Marines doing this — accepting praise for their service at political rallies — it should put out guidance rather than hammering Marines.]

Lance Cpl. Hunter Clark, the U.S. Marine seen in viral footage pulling a baby over the wall outside of the Hamid Karzai International Airport in Afghanistan, is being investigated after he appeared alongside former President Trump at a rally in Georgia.

“The 24th Marine Expeditionary Unit (MEU) has initiated a command investigation regarding LCpl Hunter Clark’s attendance at the event last weekend to determine if any DoD policies were violated,” said spokesman Capt. Kelton J Cochran. “Any details pertaining to this incident are not releasable while the investigation is being conducted.”