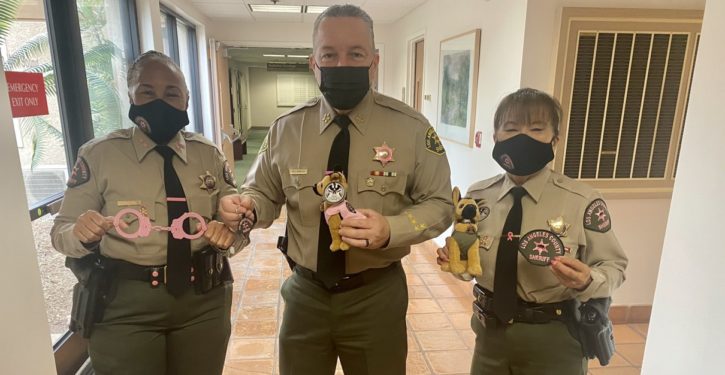 Preparing to do battle on the mean streets. LA County Sheriff, Twitter

[Ed. – An open secret for years.  Well, OK, probably not including the nice people in our LASD file image.]

At least four “secret cliques or gangs” of sheriff’s deputies — with names like the Banditos and the Executioners — continue to operate and recruit within the L.A. County Sheriff’s Department, despite recent reforms intended to ban them. The persistence of illicit factions is described in a new report commissioned by L.A. County that rebukes a department that “either can’t or won’t” manage a problem that is undermining the legitimacy of the law enforcement agency, and has cost local taxpayers tens of millions of dollars to settle claims of recklessness, violence, and harassment.

Conducted by the RAND Corporation on behalf of the county government, the report draws on an unprecedented survey of the department’s roughly 10,000 sworn personnel, and reveals that nearly one-in-six deputies have been invited to join a “subgroup” — a quarter of those within the past five years. (The report opts for the neutral language of “subgroups” and “cliques,” but recognizes that critics have long decried these factions as “gangs,” pointing to pervasive initiation rituals, tattoos, hand signs, and the groups’ often-violent behavior.)

Federal judge blocks N.Y. from enforcing vaccine mandate for health care workers
Next Post
Fauci: ‘Many, many’ more vaccine mandates to get pandemic under control