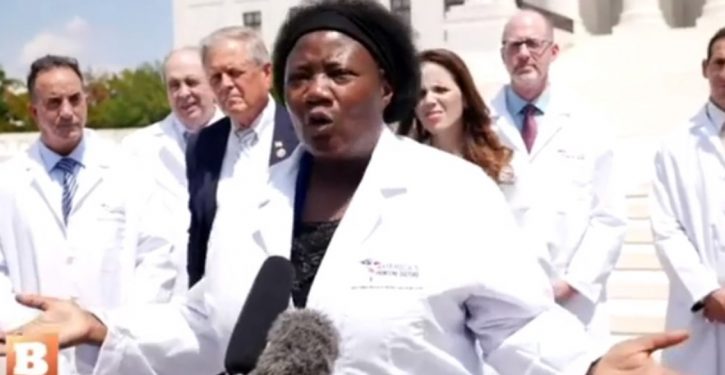 [Ed. – It will be interesting to see if her suit prospers.  If it gets a full hearing in court, it should be a real airing of scientific evidence — not media hype — on both sides of the HCQ issue.  That would be salutary.  The real tragedy is that there’s been no such airing: all favorable evidence about HCQ has been rigorously silenced.  Immanuel herself may not have been the most persuasive advocate as regards empirical evidence, but her legal team has the opportunity to showcase such advocacy, given the basis of her lawsuit.]

The Texas doctor who became famous in 2020 for promoting the use of Hydroxychloroquine [HQC], an anti-malarial drug, as “a cure” for COVID-19 has filed a defamation lawsuit against CNN and CNN anchor, Anderson Cooper in the amount of $100 million.

Dr. Stella Immanuel filed a federal lawsuit on Tuesday claiming that, “in an effort to vilify, demonize and embarrass President [Donald] Trump, Cooper and CNN published a series of statements of fact about Dr. Immanuel that injured her reputation and exposed her to public hatred, contempt, ridicule, and financial injury.”

In the suit, Immanuel says Cooper and CNN “effectively caused the deaths of hundreds of thousands whose lives would have been spared if they had been treated early with HCQ.”

New coronavirus strain dominates in the United States, but death rate is lower than last year
Next Post
Trump may have set record with $82 million fundraising total in first half of 2021