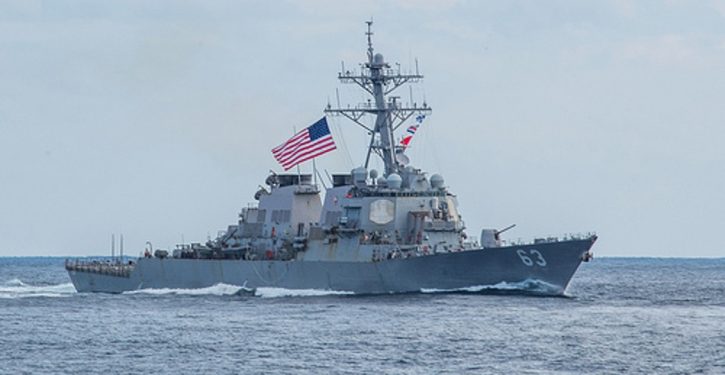 [Ed. – A rare paywalled headline.  We’re confident some readers have Newsmax Platinum access, and the author is one of our popular contributors, Mike Dorstewitz, a merchant mariner.  Bonus: interview quotes with LU’s J.E. Dyer.  More to come on this topic.  Read the report commissioned by Tom Cotton & Co. here.]

A devastating review of the U.S. Navy claims its surface fleet would be outgunned, outnumbered, and woefully unprepared in a potential conflict with China, owing to a “distracted” leadership class that’s more concerned with being “woke” than with warfighting — but there may be a way to stop the sinking.

The scathing report — commissioned by Sen. Tom Cotton, R-Ark., and Reps. Dan Crenshaw, R-Texas, Mike Gallagher, R-Wis., and Jim Banks, R-Ind. — was largely prompted by several collisions at sea involving U.S. Navy warships in the Pacific, but also examined other recent Naval disasters, including the mysterious fire that led to the USS Bonhomme Richard being decommissioned and the surrender of two small craft to Iran.

The report’s findings were based on “long-form” interviews with 77 sailors and included commissioned officers and enlisted personnel, both active duty and veterans.

One interviewee, an active-duty black female lieutenant, said she was troubled by the military’s recent emphasis on diversity training.

“Sometimes I think we care more about whether we have enough diversity officers than if we’ll survive a fight with the Chinese navy,” the unidentified officer said. “It’s criminal. They think my only value is as a black woman. But you cut our ship open with a missile and we’ll all bleed the same color.”