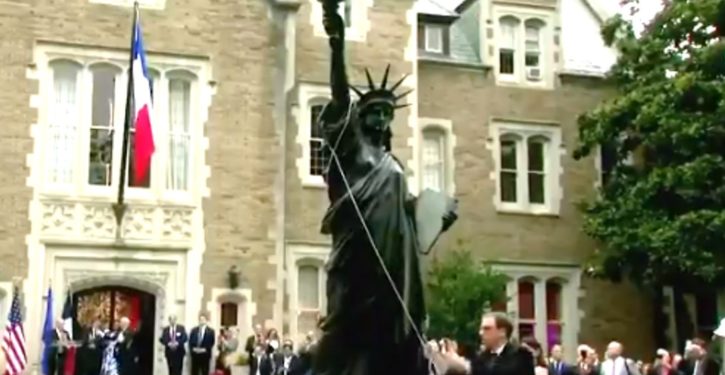 A miniature of the Statue of Liberty, on loan from France, was unveiled at the French ambassador's residence in Washington, D.C. on Bastille Day. Reuters video via Twitter

[Ed. – The reason for displaying it there — inside a fence in tony Kalorama, where few will be able to see it — is so obvious no one has to bother to comment.]

Following a brief stint in New York City, a second Statue of Liberty has found a permanent home in front of the French ambassador’s home in Washington, D.C. for the next 10 years.

An inauguration ceremony was held on Wednesday for the original statue’s “little sister” with Secretary of State Antony Blinken and French Foreign Minister Jean-Yves Le Drian, marking over 135 years since the first Statue of Liberty was unveiled in New York. The inauguration on Wednesday coincides with Bastille Day. …

France’s National Museum of Arts and Crafts (CNAM) loaned the nine-foot bronze replica to the U.S. It was made in 2009 and had been on display at the museum’s gardens since 2011. The statue made a pit stop to New York City so it could be there during the Fourth of July.