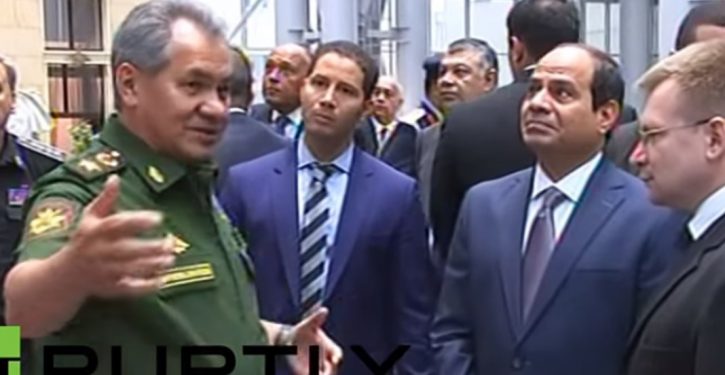 [Ed. – Egypt and Russia are both backing General Haftar, who controls the eastern side of Libya, in Libya’s national power competition.  Note that UAE’s Mohammed bin-Zayed, the visionary Arab leader at the forefront of the Abraham Accords, was there to support Sisi.  Over in Western Libya, Turkey, the U.S., NATO, and the UN back the Government of National Accord, which controls less than 10% of actual Libyan territory.  The GNA has been pretty feckless, but so have its backers.  You may think you want Russia cutting the Med in two — but you don’t.]

Egypt says the July 3 base will help it protect strategic and economic interests as well as helping guard against irregular migration as it works to boost its naval presence on the Mediterranean and the Red Sea.

At the inauguration, two Mistral helicopter carriers acquired from France were on display alongside a German-made submarine and two recently delivered FREMM-class Italian frigates.