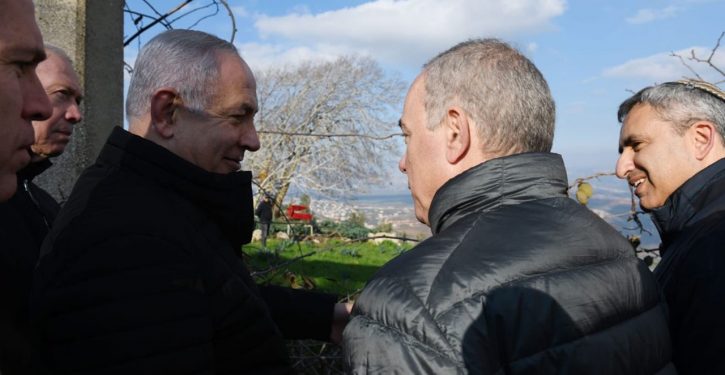 Getting a brief in the Golan Heights. Office of the Prime Minister, Twitter

[Ed. – Basically, the Biden administration posture, besides being destabilizing, would serve to make Israel and Israel-supporters more invested in the Assad regime.  “Biden” ties the need for Israeli security arrangements in the Golan to Assad’s continuation in power.  A very ill-conceived dodge behind a contingent condition.]

Secretary of State Antony Blinken … in February … would not say if his State Department continues to abide by the former administration’s decision. At the time, Blinken would only say the Golan Heights “remains of real importance to Israel’s security,” but that its formal status remains unclear. Pressed on the issue by the Washington Free Beacon, a State Department official said the territory belongs to no one and control could change depending on the region’s ever-shifting dynamics. …

“The secretary was clear that, as a practical matter, the Golan is very important to Israel’s security,” a State Department official told the Free Beacon. “As long as [Bashar al-Assad] is in power in Syria, as long as Iran is present in Syria, militia groups backed by Iran, the Assad regime itself—all of these pose a significant security threat to Israel, and as a practical matter, the control of the Golan remains of real importance to Israel’s security.”

Rep. Mike Gallagher (R., Wis.), who introduced a bill earlier this year to lock in the U.S. recognition of Israeli sovereignty over the Golan Heights, told the Free Beacon that it is now incumbent on GOP leaders in Congress to stop the Biden administration from reversing the recognition.