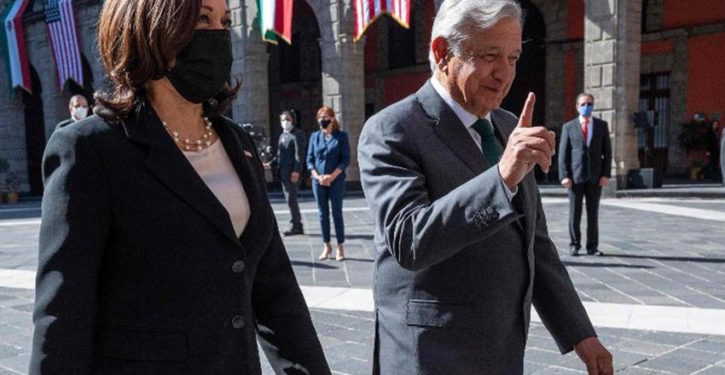 [Ed. – Freudian slip or wishful thinking? On an unrelated note, why is she wearing a mask — outdoors yet — in the accompanying photo?]

President López Obrador has been criticized on social media after he bestowed a new title on United States Vice President Kamala Harris and appeared to mispronounce her name.

AMLO, as the president is best known, welcomed Harris to the National Palace in Mexico City on Tuesday for a bilateral meeting on issues including migration, security and trade.

When Harris arrived at the seat of executive power, López Obrador welcomed her as “president” rather than “vice president.” In addition, he addressed the 49th vice president of the United States as the masculine presidente rather than the feminine presidenta, according to some social media users and media reports.

López Obrador has also received flak for mispronouncing the vice president’s first name, Kamala, as “Kabala.” Whether he actually replaced the “m” in Kamala with a “b” is unclear and questionable. …