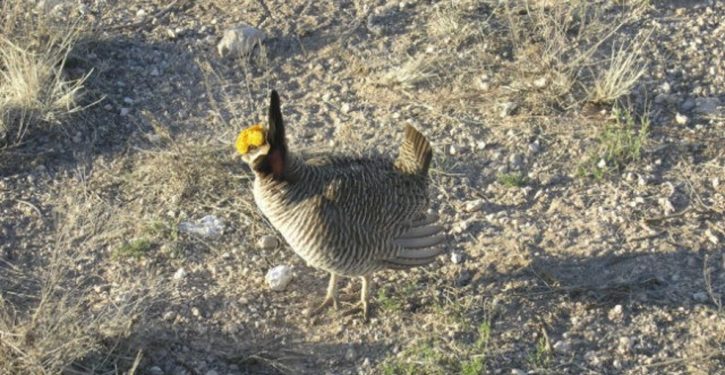 [Ed. – An Obama-era listing as a “threatened” species was rejected in court.  But “Biden” is charging ahead.  Listing the prairie chicken would have farther-reaching consequences than limiting oil and gas production, although that’s a biggie.  Where the listing is “endangered,” it would be leverage to slowly eject private owners from their land by making it unusable to them, as has been done to several million people further west over the last 40-50 years.  The affected area would run from Texas northward including parts of Oklahoma and Kansas as well as New Mexico and Colorado.]

The Biden-controlled U.S. Fish and Wildlife Service officials have proposed the listing, another reversal of former President Donald Trump’s policies, which opened up public land for use by Americans for oil and gas leases, ranching, and recreation …

The federal government is proposing two separate designations to try to prevent the species’ demise. The southern population of about 5,000 birds living along the New Mexico-Texas border would be considered endangered, while a northern group would be listed as threatened, a less-restrictive designation. After taking input from the public, the agency will make a final decision on these listings within a year.