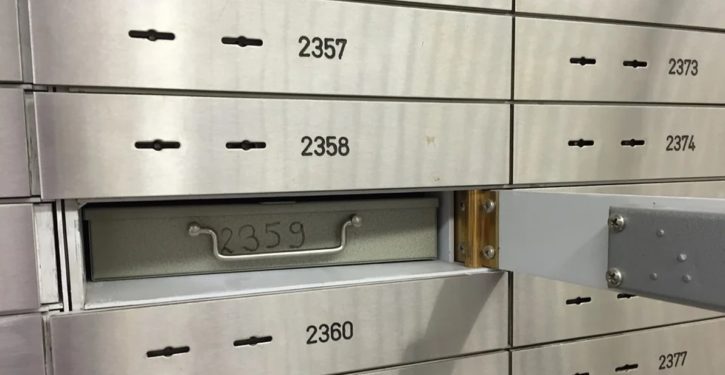 [Ed. – Huh?  The FBI seizes a whole bunch of people’s stuff without cause — any cause; the depositors’ name were not in the warrant and nothing is alleged against them — and then wants them to come claim their stuff so they can be investigated?  It’s not supposed to work that way.]

Howard tells Reason there was no attempt made by the FBI to contact him, his wife, or their heirs—despite the fact that contact information was taped to the top of their box. Six weeks later, the couple is still waiting for their property to be returned. …

Legal efforts to force the FBI to return the items seized during the March 22 raid have so far been unsuccessful, but at least five lawsuits are pending in federal court.

In order to have the contents of their boxes returned, federal authorities are asking owners to come forward, identify themselves, and describe their possessions. Some owners … may rightfully object to being subjected to the scrutiny of federal law enforcement when they have done nothing wrong.

Importantly, the warrant “does not authorize a criminal search or seizure of the contents of the safe-deposit boxes,” according to a copy of the warrant contained in court filings. The warrant also states that it “authorize[s] the seizure of the nests of the boxes themselves, not their contents.”