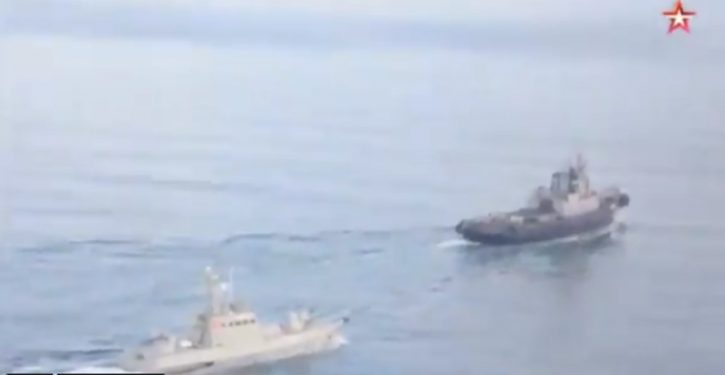 Russian patrol craft (left) approaches Ukrainian harbor tug in the Sea of Azov (what lies inside the Kerch Strait), 25 Nov 2018. Video via Twitter

[Ed. – It was a stupid, unnecessary challenge — we have no need for our own national interests to send warships through the Kerch Strait — and backing down from it poisons the atmosphere of expectations and credibility.  The international-law principle the challenge was based on is sound, but the tactical situation is decisively prohibitive.  What was it the Obama administration said about foreign policy? “Don’t do stupid sh**”?  Come to think of it, that never governed their actions either.]

Russian President Vladimir Putin has closed off access to the Black Sea through the Kerch Strait, which connects Crimea to Russia. On Tuesday, the Biden administration announced their intention to send two warships through the strait in response to the Russian military buildup on its border with Ukraine. But Russia warned the U.S. to stay away from the area “for their own good.”

Biden caved and announced today that the U.S. warships have turned around.

The Biden administration pulled back the two destroyers from steaming into the Black Sea after fighting intensified between Ukrainian and Russian-backed separatist forces in an effort to de-escalate the situation, Politico reported.