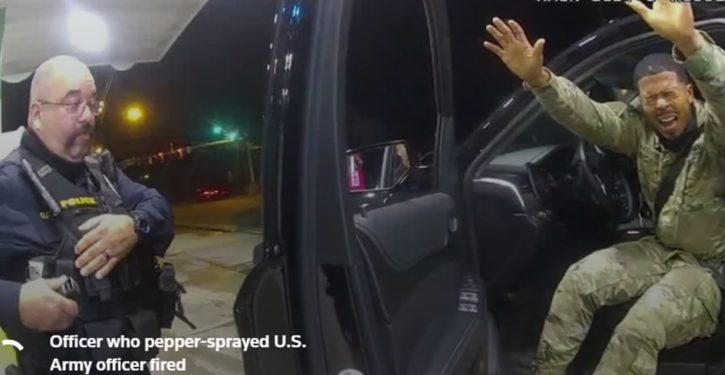 Officer Joe Gutierrez orders Army 2nd LT Caron Nazario out of his vehicle after pepper-spraying him during a traffic stop. Windsor Police bodycam video via Reuters

[Ed. – Some police departments haven’t covered themselves with glory in the last few days.  It’s a stretch to make it all about race.  But the bodycam video for this one looks pretty out of whack to me, as regards the police actions versus the driver.  The hasty firing does make me wonder if the police officer got due process.  No good is done by dispensing with it.]

One of two police officers in Virginia accused of assaulting a U.S. Army lieutenant by pointing their guns and pepper spraying him during a traffic stop has been fired, according to an official statement.

Officer Joe Gutierrez was terminated from his employment after an investigation determined he did not follow policies of the local police department, the town of Windsor, Virginia said in a statement here Sunday.

The statement did not detail any breaches or punishments for the other officer involved in the incident, Daniel Crocker.

Census Bureau says only 5% of Americans use public transit to get to work
Next Post
Irony alert: Biden holds back aid to Ukraine