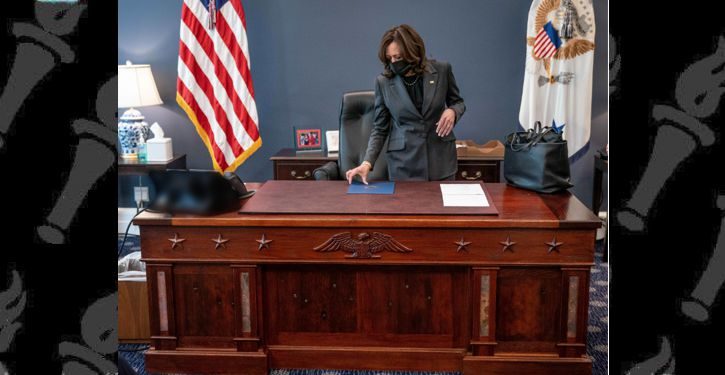 [Ed. – What an utter outrage and blight on the memories of all who died at Pearl Harbor to honor this most un-American of women in this way.]

Navy Seabees have built Vice President Kamala Harris her own desk made of materials from historic U.S. warships in the model of the famous Resolute Desk that sits in the Oval Office.

Harris’ desk, which sits in her office in the West Wing of the White House, was put together using wood, copper and nails taken from the USS Constitution, which was commissioned under George Washington in 1794.

The USS Constitution is one of the country’s first frigates and is the oldest commissioned warship still afloat. It was launched in 1797 in Boston, Massachusetts, and now sits in Baltimore Harbor.

The vice president’s desk has carvings of an eagle surrounded by stars from the Constitution’s stern decorations. …

In the pen tray is a piece of the USS Arizona that was sunk by Japanese torpedo bombers at Pearl Harbor in 1941. The wreckage still lies on the seabed in Hawaii.