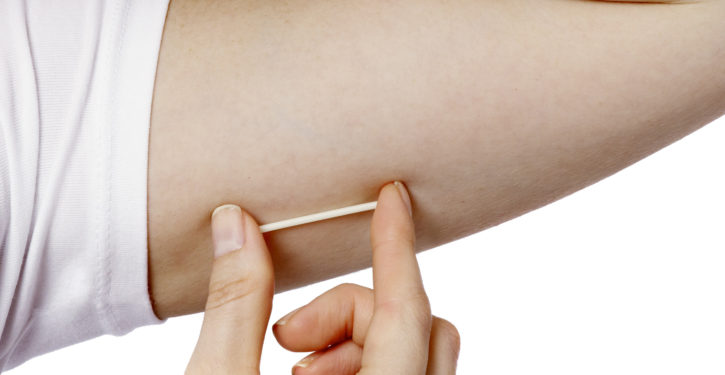 FILE - In this undated image provided by Merck, a model holds a Nexplanon birth control hormonal implant. In a report released Tuesday, Feb. 24, 2015 by the Centers for Disease Control and Prevention, long-acting but reversible methods of birth control are becoming increasingly popular among U.S. women, with IUDs redesigned after safety scares and the development of under-the-skin hormone implants. (AP Photo/Merck)

The mom of a 16-year-old girl couldn’t understand why her daughter was sick – complaining of headaches and pain in her arm. Then she made a horrifying discovery: a school nurse had implanted a long-term birth control in her daughter’s arm without her permission.

Nicole Lambert sent her daughter to get checked out by a pediatrician. The doctor notified her that the three-year contraceptive, Nexplanon, had been improperly implanted in her daughter’s arm and it needed to be removed.

According to paperwork on Merck’s website, the maker of Nexplanon, the implant should go on the inside of the upper arm. Photos show Lambert’s daughter had the implant near the back of arm. Her doctor advised taking the implant out to avoid possible complications, including blood clots.

Lambert is furious that school officials never consulted her about the birth control implant and is worried other girls may have been victimized. …