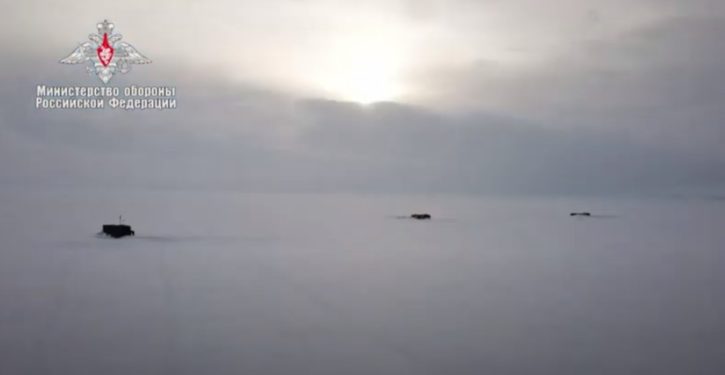 [Ed. – Lively doings in the Arctic with all the nuclear triad forces there.  The assortment looks to me like two Delta-IVs and a Borei (all SSBNs).  See video below of their choreographed simultaneous surfacing, punching through the ice reportedly near Franz Josef Land, which lies about 80 degrees north, north of the Barents Sea.  Flyovers, dramatic formal status reports, fun footage of land vehicles tooling around at the nearby military base.  As The Drive notes, the U. S. has held similar exhibitions, although not with ballistic missile submarines.]

Three Russian ballistic missile submarines surfaced next to each other from beneath the ice near the North Pole as part of a recent major Arctic exercise. The head of the country’s Navy said that event was a first for his service. It also underscores the growing geopolitical competition in this highly strategic region.

On March 26, 2021, the Russian Ministry of Defense released details, as well as imagery, about the submarine activity that has been a part of the Umka-2021 drills. So far, the Kremlin has not officially confirmed what submarines are taking part in the exercise, which began on March 20, and has also seen an unspecified nuclear submarine fire a torpedo underneath the Arctic ice. …

[O]fficial video footage, seen in full later in this story, shows what appears to be at least two sails belonging to Delta IV class submarines, also known as Project 667BDRM Delfins. It’s possible that the third boat could be either a member of the Borei class, or the lone Borei-A class submarine presently in service, the Knyaz Vladimir. …

“As part of the Arctic expedition, three nuclear-powered submarines surfaced from under the ice in a limited space with a radius of 300 meters [approximately 984 feet] for the first time in the history of the Russian Navy,” Admiral Nikolai Yevmenov, Command-in-Chief of the Russian Navy, reported to President Vladimir Putin on March 26.