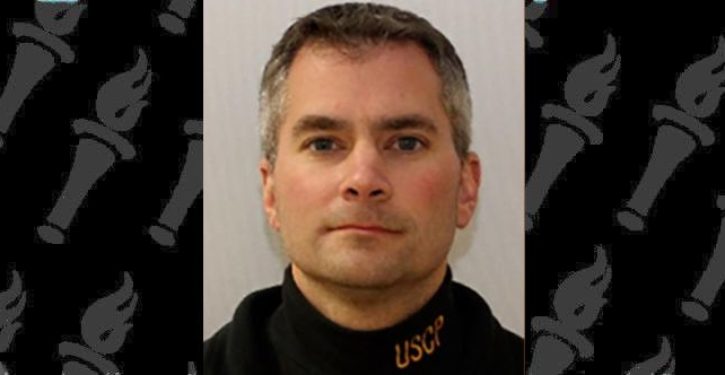 [Ed. – No charge greater than assault has been lodged, nor is any likely to be.  Officer Sicknick said he was OK after the riot and did not die until the next day, his cause of death never given.  If the authorities could boost their case with the cause of death, we all know they would.  The family was initially told Sicknick had a blood clot, seemingly suggesting a stroke.  Meanwhile, one of the men arrested, Julian Khater, said in court on Monday that he is not a U.S. citizen.  My research indicates he is from an extended Lebanese family and may be a citizen of Lebanon.  The other man, George Tanios, is also of Lebanese descent.  The two men, both in the restaurant business, knew each other prior to the 6 January event.  Tanios is involved in a lawsuit that alleges he embezzled some $435,000, apparently from his popular eatery in Morgantown, WV.  The thought that these are not typical Trump supporters seems to occur to everyone.  Here’s the investigator’s affidavit.]

The FBI announced the arrest of two Capitol Building protesters for assaulting Officer Brian Sicknick with bear spray. The day after the protest and riot, Sicknick died.

Sicknick’s family was told his cause of death was a stroke, but no other information has been released about his autopsy and his body was cremated. …

Now, in its clear attempt to link the death to protesters, the FBI announced the arrests of a West Virginia business owner, George Tannios, and a Pennsylvania man, Julian Elie Khater, for using the bear spray to assault Sicknick.

Bear spray is a regular feature of nearly every antifa and BLM riot and is used on police and others with near impunity.

Rioters in Portland used bear spray and other weapons over the weekend.

UPDATE: KHATER just made his initial appearance in federal court in New Jersey, acknowledging he could face deportation if convicted because he's not a U.S. citizen. He had retained his own lawyer, Steven Altman.https://t.co/3y9ZnYIO1g