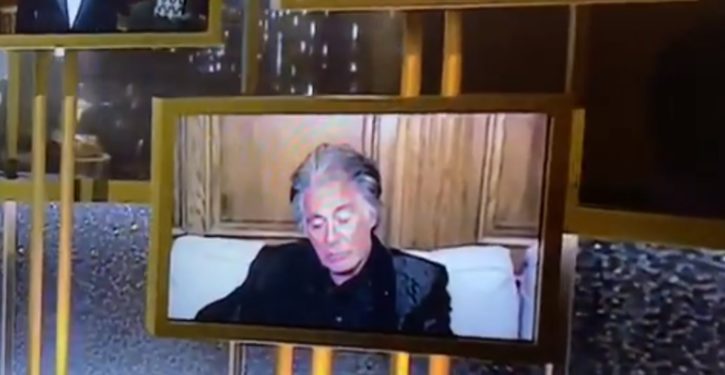 Performative review of 2021 Golden Globes by industry expert. Via Twitter

[Ed. – A reminder, I think, that many fans are content to read later who won in which category.  The real attraction of the awards shows is seeing all the stars and glitz.  Pacino wearing whatever, snoozing in his Zoom box with some weird replica of Don King hair, just doesn’t cut it.  (Viral on Twitter on Monday.)  Some of the skipping-the-Globes decision probably did cone from viewers’ expectation that, as Ben Bowles pointed out, Tina Fey couldn’t keep her vow to make the ceremony non-political for even five minutes.  Emphasis added.]

Winners notwithstanding, the obvious shortcomings of the 78th annual Golden Globes on-screen Sunday night were reflected in the ratings for the NBC-broadcast ceremony.

Although the Comcast-owned network doesn’t plan to release final numbers from Nielsen until Tuesday, semi-adjusted fast nationals reveal that the bicoastal show hosted by Tina Fey and Amy Poehler took a hit from last year. And we don’t just mean the worthy whack the Hollywood Foreign Press Association has been taking from some of Hollywood’s heaviest hitters over the 87-member group’s lack of Black members.

Coming in with a 1.2 rating in the adults 18-49 demographic and about 5.4 million viewers, the 2021 Globes telecast fell about 60% in both categories from the partially adjusted fast national numbers snared last year by the Ricky Gervais-fronted awards show.