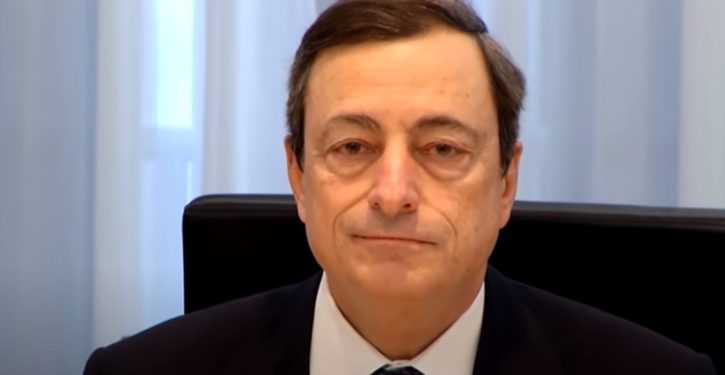 [Ed. – There’s a “tell” in the last sentence of this report that something “canned” is going on here.  I wondered instantly when the Conte government was broken up why Matteo Renzi pulled out of it, when there was no compelling reason to.  Renzi had no view to snap elections; he was just pulling the pins on the status quo.  Now this report gives us a chirpy bio of “Super Mario,” and finishes with this gem:  “In January 2021, a citizens’ movement demanded that the economist nicknamed ‘Super Mario’ take the reins ‘to save Italy’.”  Talk about a gratuitous, narrative-churning plot point: a “citizens’ movement” with no name demanding Mario Draghi.  Yeah, I believe in that like I believe in Glinda, Good Witch of the North.  Draghi is the quintessential transnationalist central banker.  Something’s up.]

The former head of the European Central Bank was called in by Italy’s president on Tuesday to help resolve a political crisis that has threatened the ability of the eurozone’s third largest economy to confront two concurrent crises — the ongoing coronavirus emergency, and a punishing recession.

It is widely expected that President Sergio Mattarella will ask Draghi to take over as prime minister on Wednesday.

He may be the man for the moment. …

For weeks, political watchers have cited Draghi as a top choice for leading Italy out of its current problems.

Jeff Bezos to step down as Amazon CEO
Next Post
Latest symptom of ‘white supremacy’: The humble acronym