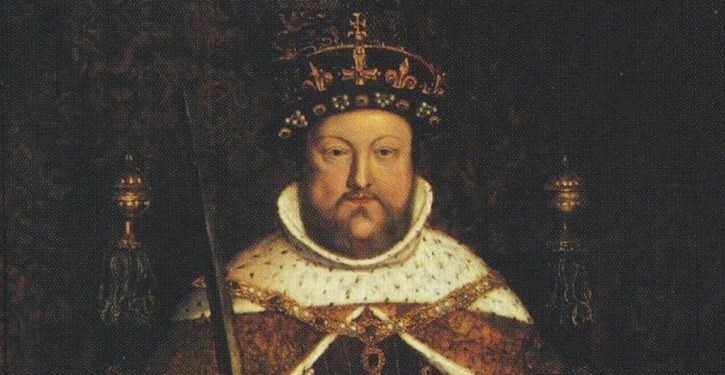 Henry VIII and the Barber-Surgeons, 1540 (detail). Hans Holbein the Younger. Via Wikimedia

[Ed. – File under “things you can only do in England.”  The crown was parted out during the Interregnum, and the gold figurine lost for close to 400 years.  Then recently found, and patriotically turned in, by an amateur treasure hunter in Northamptonshire.  Amazing story.]

Kevin Duckett was hunting for treasure with his metal detector in a field near Market Harborough, Northamptonshire, England, when he unearthed a solid gold figurine that experts believe is part of a long-lost part of the crown of Henry VIII. …

In 1649, Oliver Cromwell abolished the monarchy, beheaded King Charles I and ordered the crown, once worn by Henry VIII, to be melted down, minted and sold as coins — orders that weren’t followed.

According to the Sun, the crown’s 344 precious stones were sold separately while other parts of the crown were passed on intact — never to be seen again.

Trump announces new leads for legal team
Next Post
Biden: ‘We have enough vaccine to fully vaccinate 300 Americans’ That few?