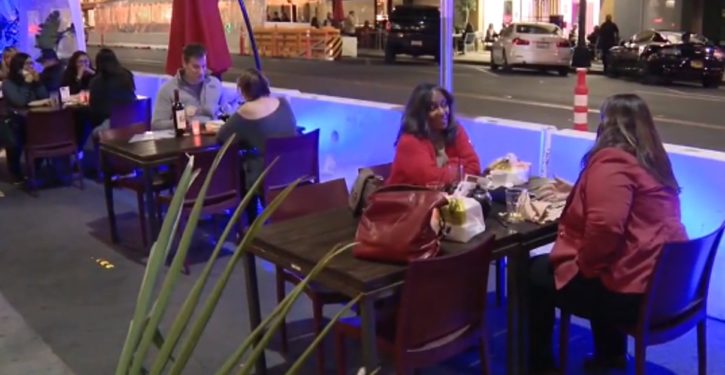 [Ed. – It seems no one is trying to pretend this isn’t about preventing Super Bowl gatherings.  On the other hand, there were no qualms about telling people straight up they’d have to “forgo Thanksgiving” and “miss Christmas” a couple of months ago.  So why be coy now?  Surely not because there’s a different president.]

Los Angeles County is allowing Californians to go to restaurants and eat outside at 25 percent capacity but they are forbidden from watching television while doing so.

“Televisions or any other screens that are used to broadcast programming must be removed from the area or turned off,” the order states. …

The L.A. County Department of Public Health did not give a reason for the television ban nor has it replied to requests for comment from numerous news organizations.

The Los Angeles Daily News reports, “the restriction is an apparent effort to prevent gatherings of sports fans to watch games and other events, most notably during the most-watched TV show of the year, the NFL’s championship game.”