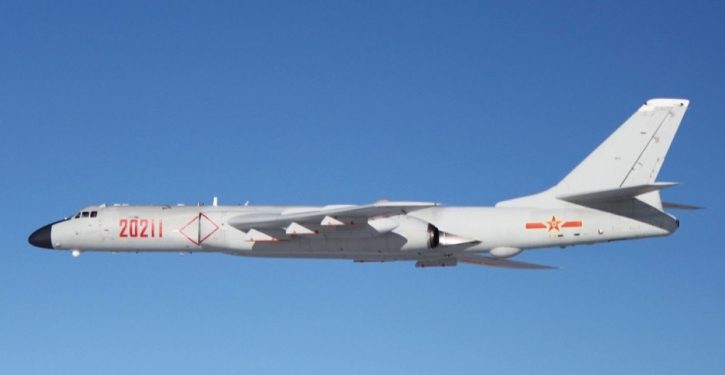 [Ed. – Good map in the tweet. The report appeared in the Financial Times and referred to Chinese radio chatter, which was obviously intended to be heard.  There’s nothing new about simulated attacks on targets of opportunity, and USS Theodore Roosevelt and escorts would have been well aware of it the whole time (and no doubt tracking the Chinese and holding them at risk as appropriate).  All that said, it’s a reminder of the level of no-kidding weapon-system bristling going on out there.]

As already reported in detail, a total of 28 aircraft, including as many as eight PLAAF (People’s Liberation Army Air Force) H-6 bombers, “intruded” into Taiwan’s ADIZ (Air Defense Identification Zone) between Jan. 23 and 24, 2021.

A confirmation that the mission flown on Jan. 23 was simulating an air strike on the U.S. aircraft carrier comes from the Financial Times, that on Jan. 29, 2020 reported: “People familiar with intelligence collected by the US and its allies said the bombers and some of the fighter aircraft involved were conducting an exercise that used a group of US Navy vessels led by the carrier USS Theodore Roosevelt in the same area as a simulated target. Pilots of H-6 bombers could be heard in cockpit conversations confirming orders for the simulated targeting and release of anti-ship missiles against the carrier, the people said.”