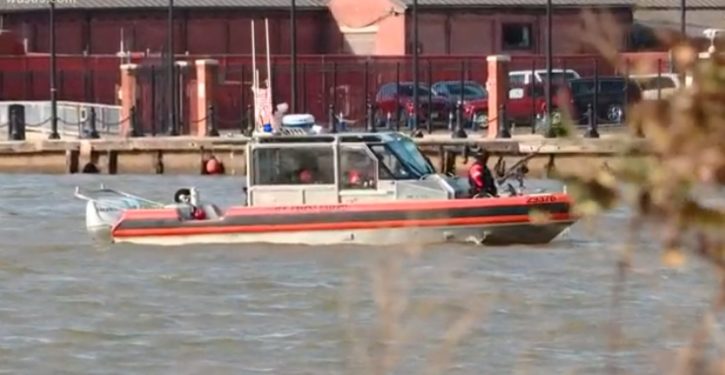 U.S. Coast Guard plies the waters of the Potomac and Anacostia ahead of Inauguration Day. CBS 9 D.C. video

[Ed. – If there is a real attack on the inauguration, Biden, or anything else being done by the Left, legitimate attackers won’t be bald men with scraggly beards.  That stereotype is being done to death.  It’s ready for its close-up as a samizdat joke theme.]

[A] Virginia woman … suspected she might have spotted rioters planning to invade Washington by boat. The Coast Guard says it’s ready for that possibility, but has no intel suggesting it will really happen.

The woman, a process server who is not easily scared, said she spotted pick-up trucks loaded with what she called “heavy-duty” kayaks, and guys in fatigues with bald heads and scraggly beards headed north on Sunday. She notified DC police, the F.B.I and police in Culpeper. She said they took reports, but she’s unsure if they followed up.

“How many people are out here kayaking in January, coming from out of state, from the South where it’s warm to the North where it’s colder? It just alarmed me,” she said.