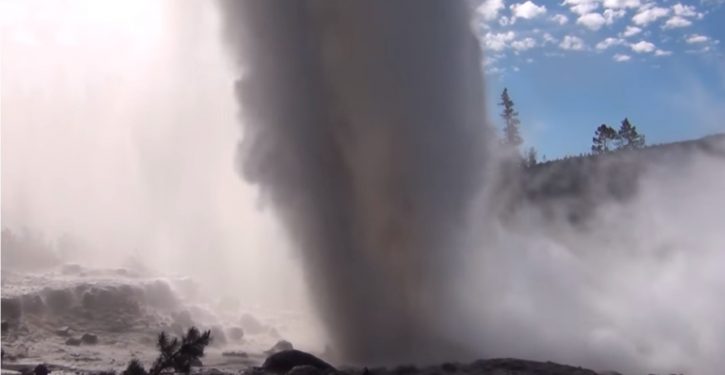 [Ed. – It’s quite a distance away, and doesn’t seem to involve the same geologic features, but I continue to wonder if the strange drone flights over Nebraska and Colorado last year (see here as well) were some kind of survey of underground activity, of a kind related to the description in this article of Norris Geyser Basin.  Probably not. :-)]

Steamboat, the world’s tallest active geyser, can launch superheated water almost 400 feet into the sky. These eruptions have been erratic, with gaps between each major outburst lasting anywhere from four days to 50 years. But in March 2018, it began a showstopping performance that shows no sign of petering out. The geyser’s 129 eruptions from the moment of its awakening to the present date exceed the total number seen gushing from Steamboat in the preceding half-century. …

And a study, published Monday in the Proceedings of the National Academy of Sciences, has at least ruled out certain culprits, such as earthquakes or snowfall. Even though scientists couldn’t pin down a prime suspect, the finding extends scientific knowledge of the natural engineering underlying geysers, which remains fuzzy at best.

A Chicago-size section of [Norris Geyser] basin has been rising and falling in elevation lately, and a recent study suggested this was driven by pockets of hydrothermal fluids moving about and ultimately gathering just below the surface.