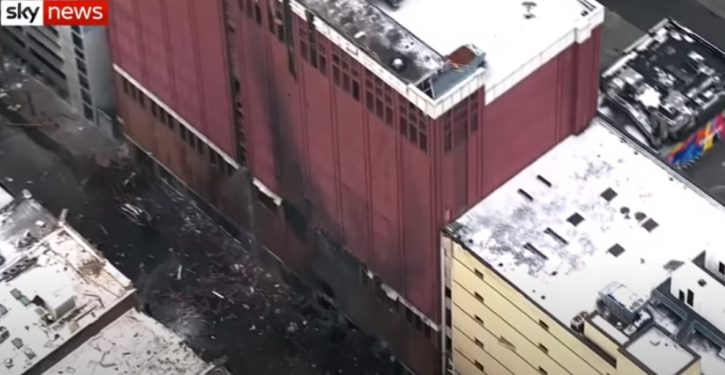 Overhead view of the damage after the explosion. The AT&T hub is on the right: both the reddish building and the light-colored extension. The blast marks appear on 2nd Avenue in front of the AT&T building. Sky News video, YouTube

[Ed. – This is a weird episode.  It’s fading from national media coverage with unnatural speed, in the manner off the Las Vegas shooter.  Some of the story is hard to swallow, like the part about Warner’s girlfriend tipping the police to his “bomb-making,” but nothing apparently being done about that.  Now the FBI is working through the media to request recipients of “material” from Warner to come forward — something the FBI probably wouldn’t have to resort to, if it had concrete evidence of  “material” being sent to people.  They’re the FBI.  Odd, if they know materials were sent but can’t find the recipients using their own resources.]

The FBI is looking to speak with anyone who may have received materials from the man who authorities allege detonated a bomb in downtown Nashville, Tenn., on Christmas day.

The agency said it was aware that 63-year-old Anthony Q. Warner sent materials to several acquaintances across the country.

“We’re aware the suspect sent materials which espoused his viewpoints to several acquaintances throughout the country,” Special Agent Jason Pack said in a statement to The Hill.

“Were asking those who received these to contact the FBI at 800-CALL-FBI,” the statement continued. Pack did not specify what Warner may have sent.

A plan for breaking through media fog on election fraud
Next Post
Proposed N.Y. law would allow detention of COVID-infected, enforce mandatory vaccination