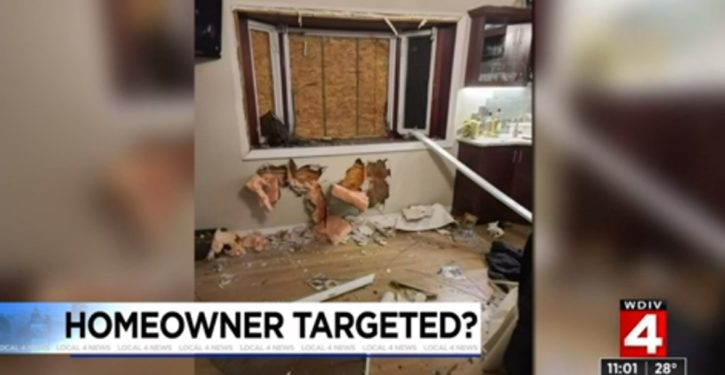 [Ed. – The explosive was reportedly an artillery-shell-style fireworks round, thrown in through the window.  It doesn’t look like the kind of neighborhood (are there any such neighborhoods?) where fireworks being thrown into people’s windows is common.  The man and his neighbors suspect this has to do with the big pro-Trump displays on his property.]

The homeowner said everything happened early Saturday morning just after midnight. He was upstairs with his girlfriend when they heard a loud boom go off. He rushed downstairs and said he was shocked at what he saw. …

The explosion left a large hole in his living room floor.

“When we came outside, we noticed the whole window, it was completely blown out, smoke coming out. I didn’t know if the house was on fire or what was going on,” the homeowner said. “I seen a truck racing down the road. When the police showed up, they went in, luckily it didn’t catch fire, but the actual implosion of the mortar, it did some serious damage.”