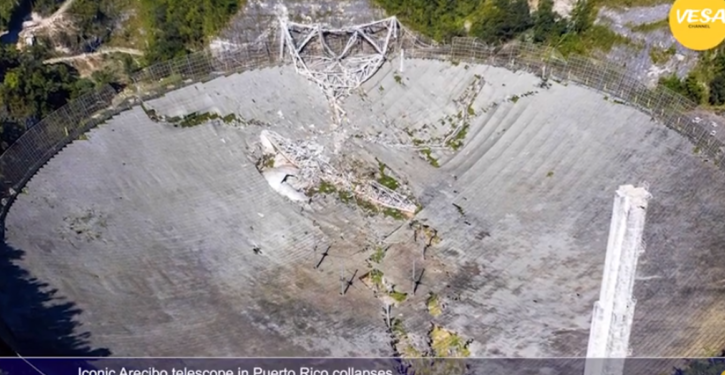 [Ed. – The telescope has been out of commission for several months because of localized structural damage.  But the complete collapse basically means there will be no appeal from the National Science Foundation’s earlier decision to close it down.  I don’t have a comprehensive view on this yet, but it sounds as if some of the sneak-up asteroids whizzing by Earth in recent months might have been seen if the Arecibo telescope were operational.  There are other assets still operating at the observatory, but they don’t detect approaching space objects.]

The Arecibo Observatory, a huge and previously damaged radio telescope in Puerto Rico that played a key role in astronomical discoveries for more than half a century, completely collapsed on Tuesday.

The telescope’s 900-ton receiver platform fell onto the reflector dish more than 400 feet below.

Puerto Rican meteorologist Ada Monzón broke into tears on local TV as she delivered the devastating news to other heartbroken Puerto Ricans across the U.S. territory. …

The U.S. National Science Foundation had earlier announced that the Arecibo Observatory would be closed. An auxiliary cable snapped in August, causing a 100-foot gash on the 1,000-foot-wide (305-meter-wide) reflector dish and damaged the receiver platform that hung above it. Then a main cable broke in early November.