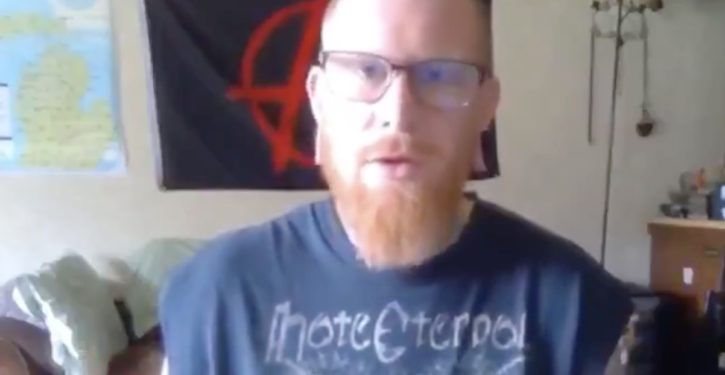 [Ed. – Whatever the FBI and media are doing with calling this guy a Boogaloo — and they may be right about that — one thing they’re NOT doing is establishing that the Boogaloos are a “right-wing” movement, or one that has an affinity for Trump.  If the guy in the videos is a white supremacist, meanwhile, he doesn’t seem to have it as a priority.  He looks like a guy whose thing is despising government — apparently dangerous, if he was plotting to kidnap the governor, but not a fit for anyone’s cartoon villain box.]

A new video of one of the 13 men arrested and charged in an alleged kidnapping plot against Michigan Gov. Gretchen Whitmer shows the suspect is a Trump-hating anarchist despite media claims the plot was hatched by pro-Trump white supremacists.

“You know Trump is not your friend, dude,” said Brandon Caserta, with a large anarchist flag hanging on his wall behind him. “And it amazes me that people actually, like, believe that. When he’s shown over and over and over again that he’s a tyrant. Every single person that works for government is your enemy, dude.”

In another video from Caserta, the anarchist asserted, “[police] are oppressing you for a paycheck.” “If you’re still supporting law enforcement… you are supporting the people who are enforcing slavery on everyone else.”