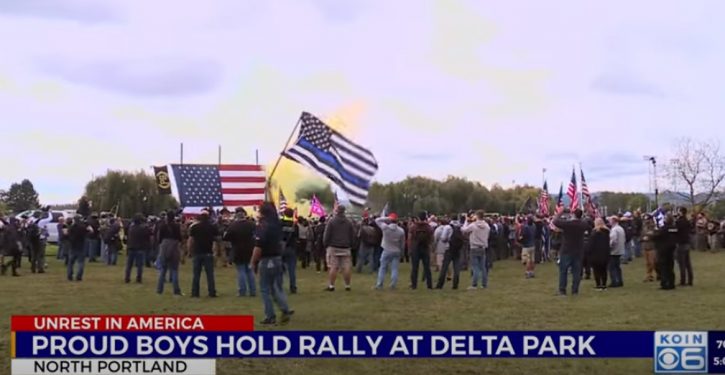 [Ed. – I carry no brief for the Proud Boys.  I see as little need for them to demonstrate as I do for non-violent BLM assemblies – while acknowledging the right to demonstrate of both groups. But it is blatantly biased to do nothing for more than 100 days as Antifa and BLM torch, loot, smash windows, break into police precincts, besiege the federal courthouse in Portland, attack police, torment innocent civilians in their homes, and even — finally — shoot and kill a peaceful demonstrator … and then at last declare an emergency only when the Proud Boys group, which has never done any of these things, holds a rally. This governor has taken a side, and is not acting in good faith.]

The Proud Boys, a self-declared “Western Chauvinist” group, forecast a crowd of at least 10,000 when they asked for a permit to hold the demonstration in Delta Park, a request which was denied by the city. The rally went ahead anyway, ringed by a heavy police presence.

Several vehicles were stopped as they left and drivers ticketed for infractions including obscuring their license plates, according to state police and reports on social media.

Governor Kate Brown on Friday declared a weekend state of emergency for Oregon’s biggest city, saying “white supremacist groups” were traveling from out of state to attend an event the Proud Boys said was organized to “end domestic terrorism.”

London mayor wants household visits banned in city (yes, it means what it sounds like)
Next Post
Facebook exec on why right wing has ‘massive advantage’ on the platform