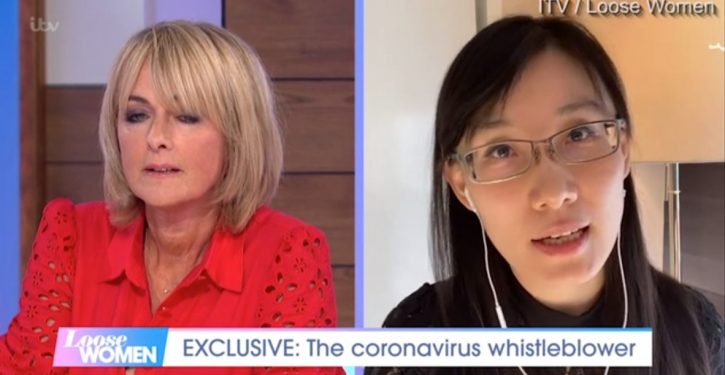 [Ed. – That may be a tough question to attract interest with, but the article makes a really good point.  The coronavirus isn’t actually dreadfully lethal, which Dr. Yan kept depicting it as.  For a bioweapon, its death toll and effects on the human body have been underwhelming.  Its real power has been in the national reactions to it, which have disrupted human life around the entire world.  Yan’s interview with Tucker Carlson would serve a Chinese interest in causing that effect better than any other objective.  I saw the segment with Yan live, and Michael Thau’s point resonated with me that she didn’t seem the slightest bit nervous about her own safety, or what China might do to her or other people in Hong Kong.  Note: don’t lose heart through the initial portion about China overhyping a few cases of viral pneumonia at the beginning of the COVID-19 outbreak.  It makes an integral point.  This is a treatment to take seriously.]

[The Chinese] seemed to be doing everything possible to not only invite comparisons to the 2003 SARS outbreak but also make the comparison seem nightmarish when, in fact, it’s anything but.

[I]f what Dr. Yan is saying is true, the enthusiasm Chinese authorities showed for hyping the [pneumonia] virus is tough to explain. …

Why would the CCP want to identify the bioweapon they’d unleashed and its Chinese origins months before it even struck its targets? For that matter, why would they release it in China first and let it make its way to the West, instead of starting it off in one of the countries they were targeting? …

[S]urprisingly, though she presents herself as the sworn enemy of China’s government, Dr. Yan is actually doing more to promote the narrative China has been pushing on the world than she’s doing to refute it.