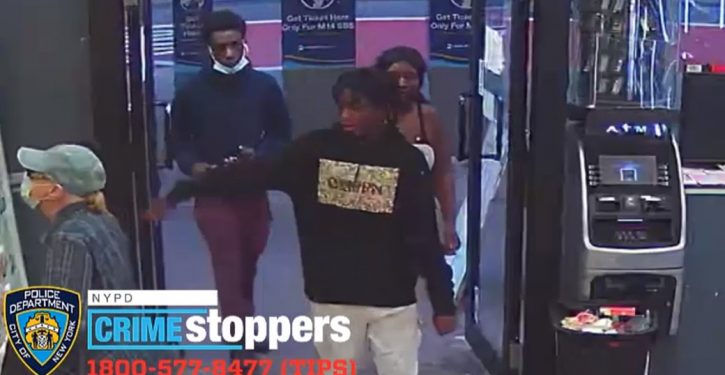 [Ed. – All bets are off when the victim is no an unarmed black man and the aggressor is a cop.]

The NYPD is asking for the public’s help identifying three teenage suspects they say robbed and punched a 74-year-old woman in the East Village.

Authorities say that security footage shows the three suspects walking past the victim on East 14th Street just before 7 p.m. on September 3, when one of the group snatches the woman’s purse. As the woman turns to confront them, one of the suspects punches her in the face, knocking her to the ground. The suspect who grabbed her purse then drops it and all three flee the scene.

“Although the victim sustained bruising and swelling to her face and cuts and scrapes to her hands she refused medical attention,” the NYPD said.

The three suspects, two males, and one female were described by the NYPD as between 14 and 18 years of age.