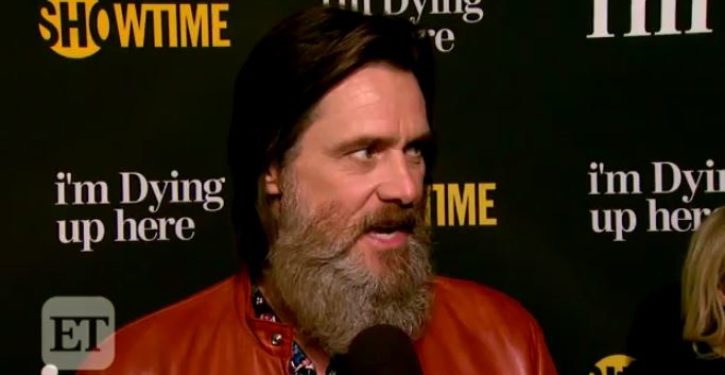 [Ed. – The Atlantic is going for some sort of record. Days after publishing its scurrilous attack on the president, it publishes a soul-searching ‘sermon’ by hate-monger Jim Carrey on the evils of Donald Trump.]

I’ve spent much of my career trying to reach audiences through humor. It’s always come from a loving place, a joyful place — wanting to free people from concern. I know that hearing a performer give voice to the things you’re thinking and feeling can be an enormous relief and that laughing hysterically at a willing fool is almost always good medicine. But relying on jokes can sometimes cancel out the seriousness of what you’re trying to say. At this moment, the best anyone can offer is gallows humor. The truth is, we should all be seriously concerned.

The United States faces catastrophe. That’s a word from my world — drama. In ancient Greek, katastrophḗ means “overturn,” or “a sudden turn.” This is what we have suffered. Untold American lives have been ruined by the presidency of Donald Trump.

For us white people, achieving the status of ‘woke’ is only the beginning
Next Post
25-year veteran Cleveland police officer dies after being shot multiple times