[Ed. – How does he explain the fact that BLM and Antifa have been practicing for the past three months?]

Former Vice President Joe Biden said Sunday that the pro-Trump caravan that drove through Portland, Oregon, on Sunday was “spoiling for a fight.”

Biden was responding to the shooting death of a right-wing protester Saturday evening who had reportedly participated in the pro-Trump caravan.

The victim’s name has been reported as Aaron “Jay” Danielson. According to the Oregonian, police are investigating a man named Michael Forest Reinoehl, 48, for the crime. He is allegedly a supporter of Antifa and Black Lives Matter who has taken part in riots over the past several months in Portland, and was reportedly arrested by police at a riot July 5th and cited for possession of a loaded weapon.

Video of the caravan showed confrontations with left-wing protesters on the streets. 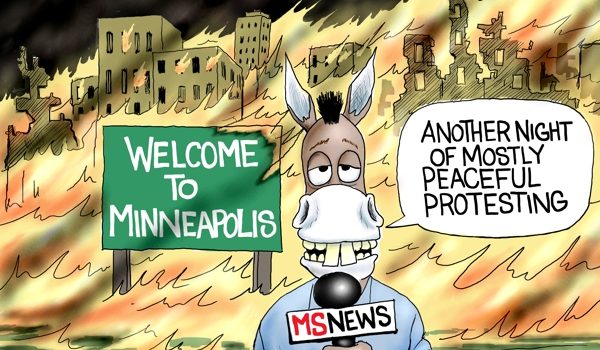 Cartoon of the Day: Mostly peaceful
Next Post
White supremacists are invading American cities to incite a civil war