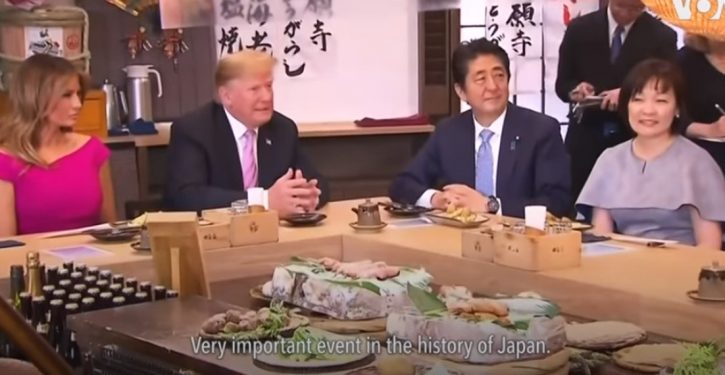 The Trumps and the Abes enjoy a traditional Japanese meal during the Trumps' 2019 visit. VOA video, YouTube

[Ed. – Abe’s steady presence under regional pressures and stalwart friendship to the U.S. will not be readily replaced. This is a blow.]

Japanese prime minister Shinzo Abe announced on Friday that he would resign for health reasons, marking the end of his tenure as Japan’s longest-serving leader.

Abe was diagnosed with ulcerative colitis as a teenager, and first stepped down one year into his first term in 2006 because of complications from the chronic illness. However, Abe returned to politics and was reelected in 2012, and has implemented a series of economic reforms combining fiscal stimulus and monetary easing dubbed “Abenomics.”

Abe attempted to steer Japan in a more nationalistic direction, revitalizing the country’s military and calling to rewrite the country’s U.S.-drafted, pacifist constitution. Amending the constitution received little popular support in Japan, and Abe lamented that he would have to leave office before finishing his work.